The area of Germany we lived in was the Rhineland-Palatinate in the southwestern part of the country. By train, we were closer to Paris (3 hours) than to Berlin (5 hours), which is on the opposite side (northeastern part) of Germany. So we only made it to Berlin once; but, it was a fantastic day trip on our way to the Baltic. 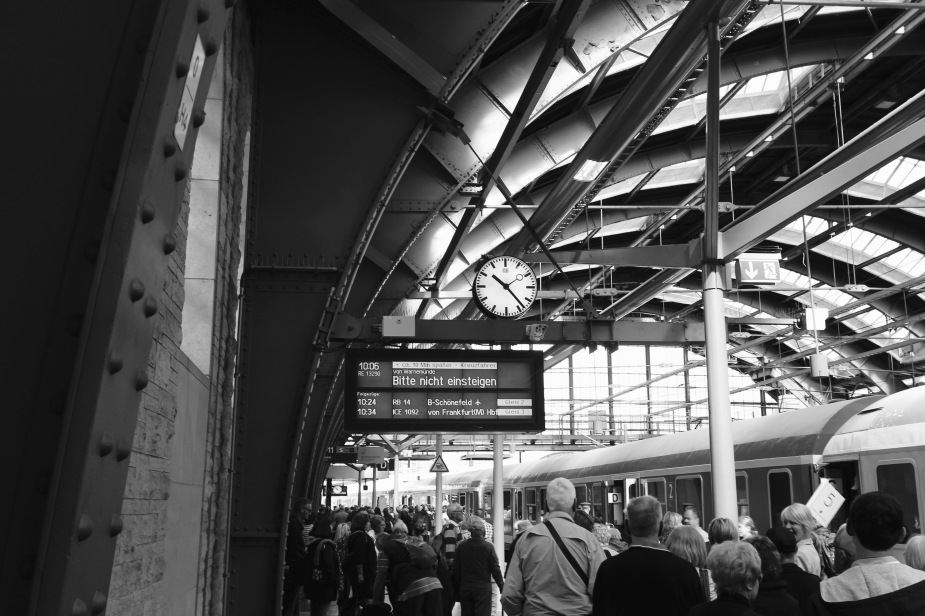 After arriving via train, we took in the main tourist sites of Berlin. 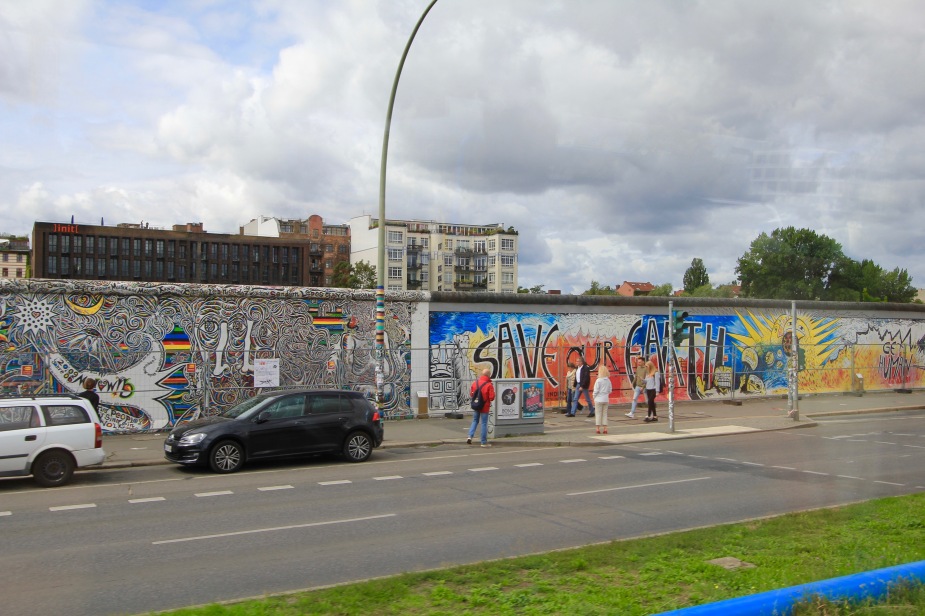 The “East Side Gallery” – the longest, remaining section of the Berlin Wall (about 1.5 miles). Today, Berlin has commissioned various artists to create artwork (some political) along the wall. 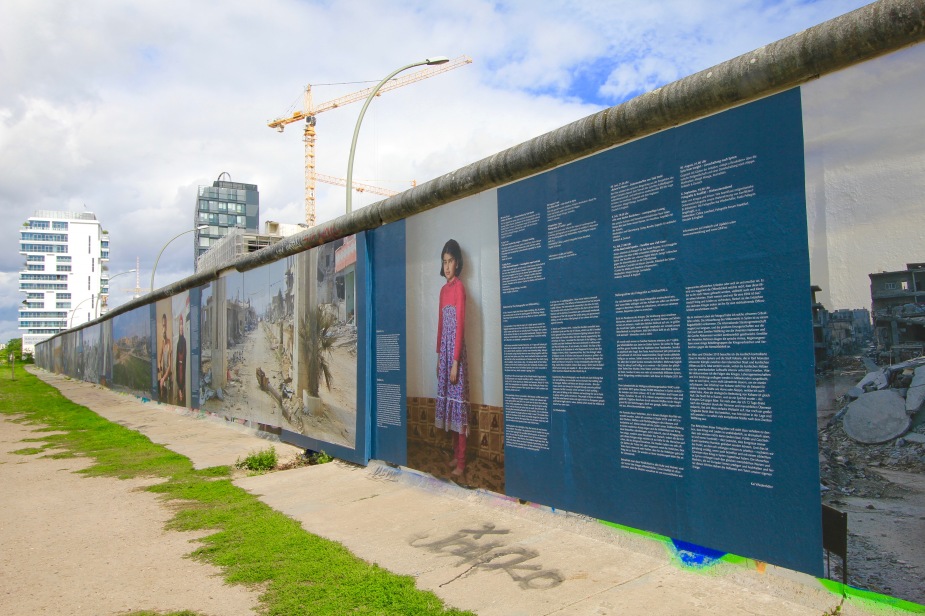 When the Wall was here, the West Berlin side was typically painted in graffiti and artwork. On the East Berlin side, the wall remained unpainted. 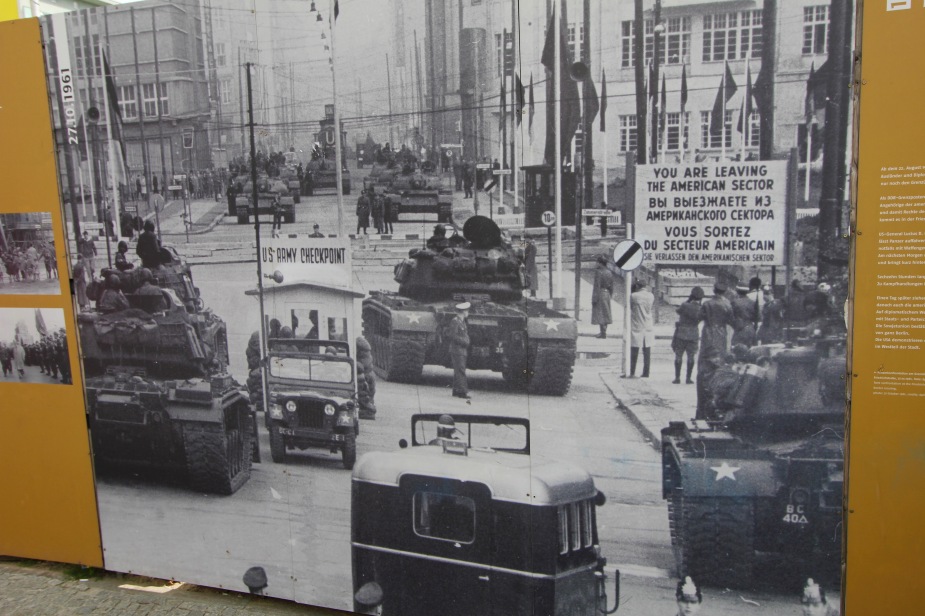 The above picture is “Checkpoint Charlie” showing the standoff between the Soviet and American tanks in October 1961 for 18 hours. This was a tense moment in history as the two superpowers could have easily started the next world war here if a single gunshot was fired.

The standoff started because prior to the Wall’s construction people could freely move between the occupied areas of Berlin (the city was divided between the Soviets, British, French, and Americans after WWII). The Wall was built and an American diplomat was turned away by the Soviets. The next day when another diplomat attempted to enter, he was escorted by an American tank. Well, of course, the Soviets didn’t like this and placed their tank opposite the American’s. 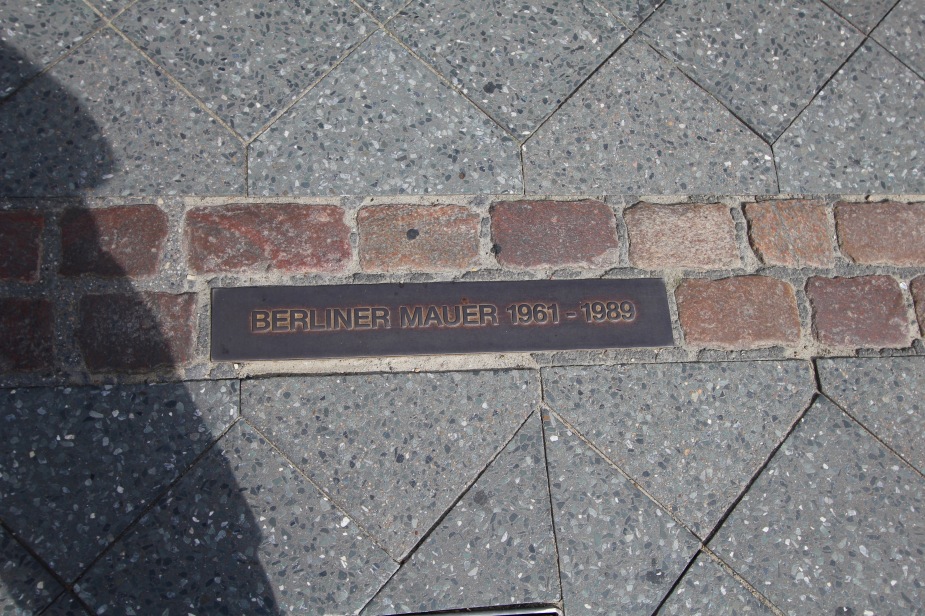 Most of the Wall is no longer standing. In its place throughout the city is a row of two bricks marking where the Wall once stood. 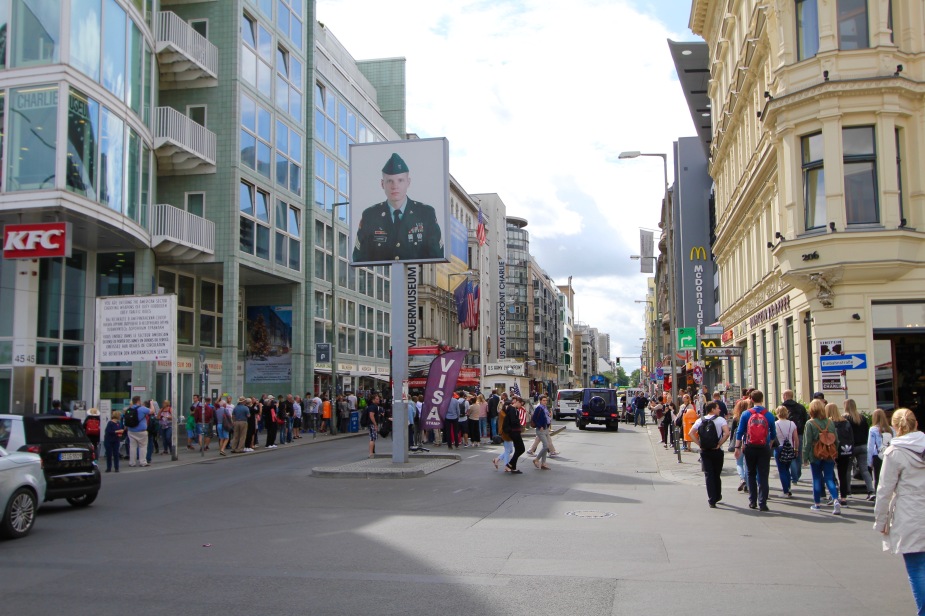 Now, Checkpoint Charlie is a tourist destination and no longer a military post.

TRAVEL TIP: on the right, you see a McDonald’s — in most large cities, you will find one and it is good for two reasons: free bathrooms and free wi-fi 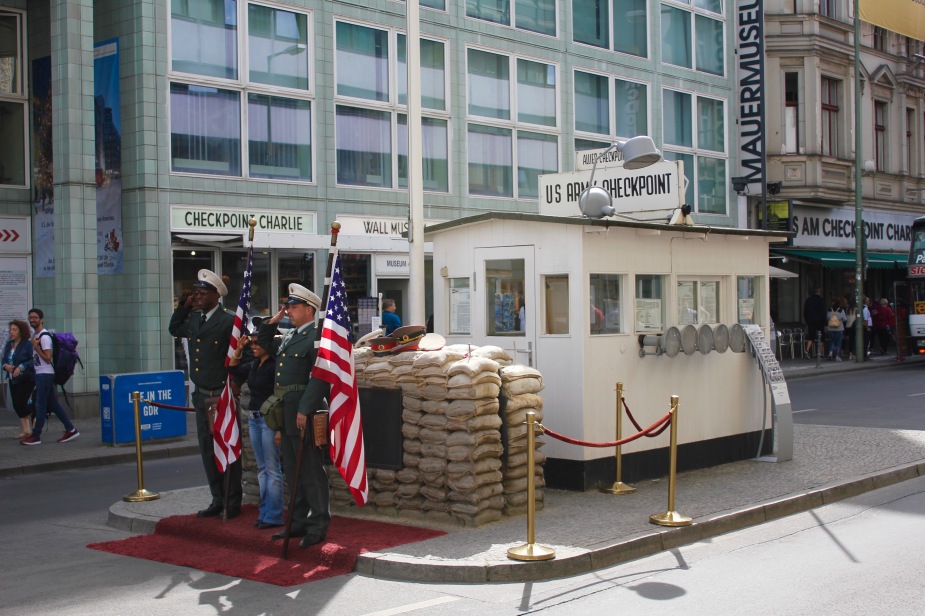 The Wall fell in 1989, the booth was used until the reunification of Germany on October 3rd (my birthday) in 1990…and today, for 2 Euro, you can get your picture taken with two actors. 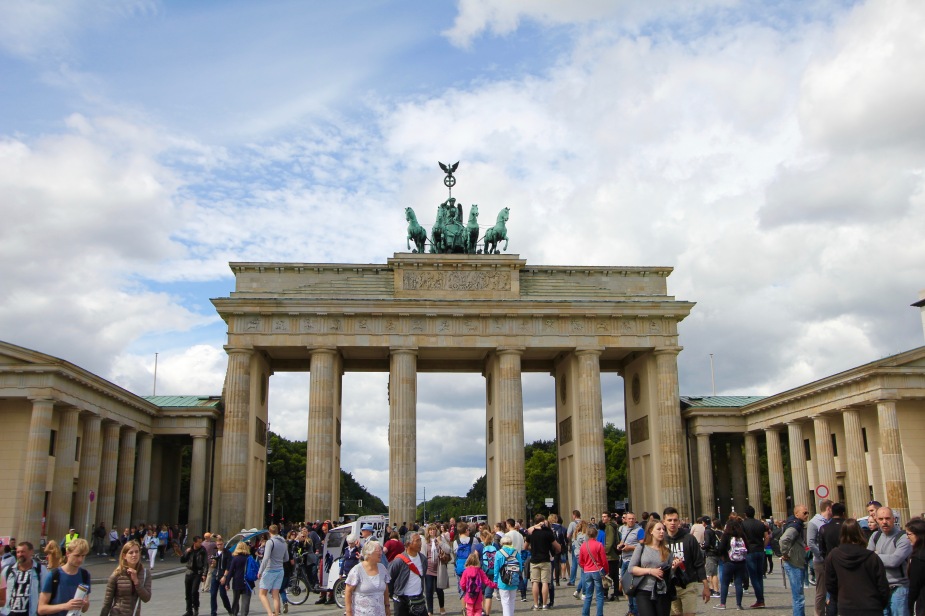 The Brandenburg Gate is easily one of the most iconic structures in Berlin. Built in the 1780s by the King of Prussia to represent peace. It was badly damaged during WWII, patched up during the Cold War era, and fully restored in the early 2000s.

The Holocaust Memorial. Opened in 2005 at the 60th anniversary of the end of WWII. 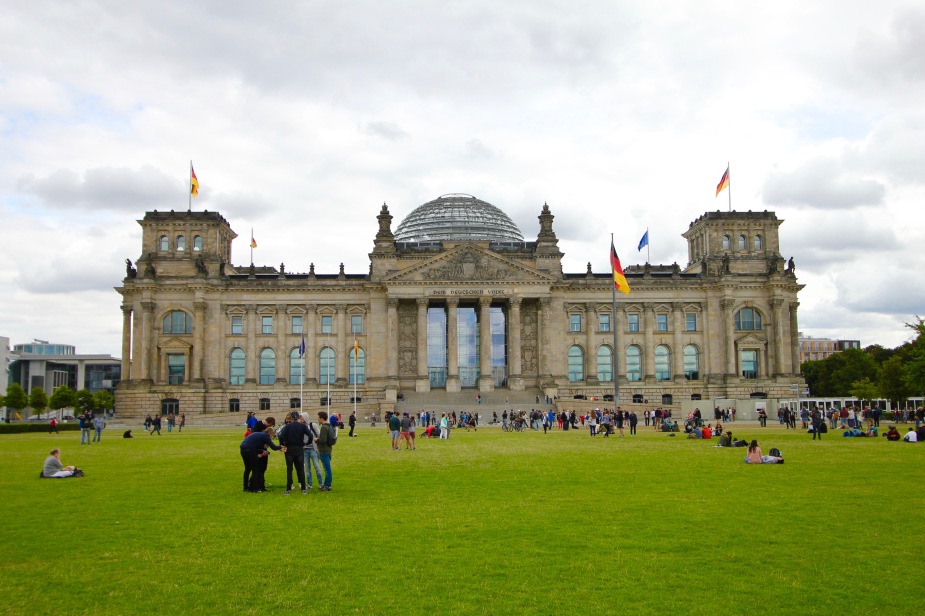 Reichstag building (German Parliament Building). Originally constructed 1884-94. This was the building that burned in 1933 (under suspicious circumstances) and was part of the process that allowed Hitler to assume his position as Chancellor. The building was in ruin after WWII and thankfully restored in the 1960s. 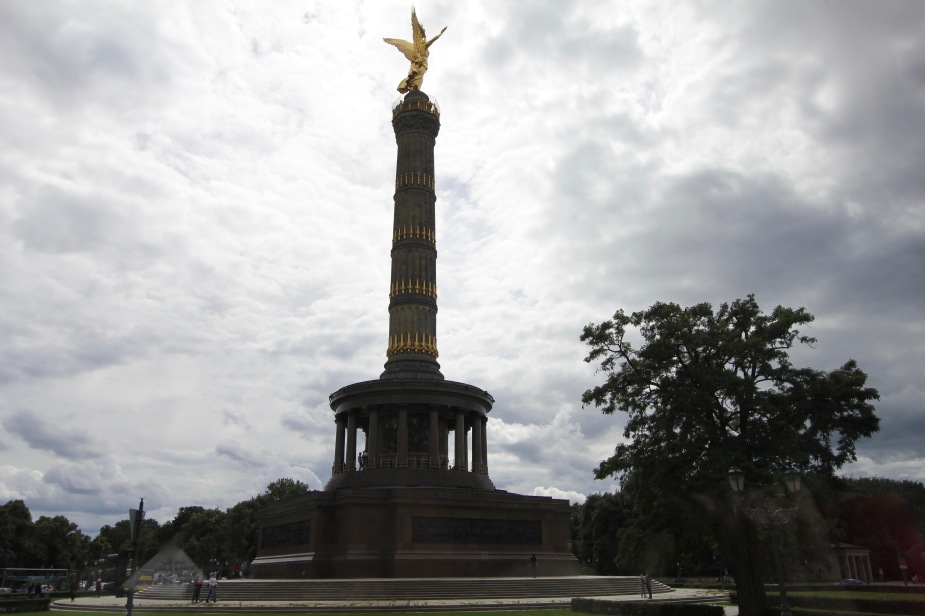 The Victory Tower built in 1864 after the Prussian Army defeated the Austrians, French, and Danish in various wars of the 19th century (amazing history!).

The wars lead to the unification of present-day Germany from the various different German tribes in the region. In 1939 the Nazis relocated this tower to a major intersection in the city. This move unintentionally saved the tower from bombing during WWII and escaped damage. 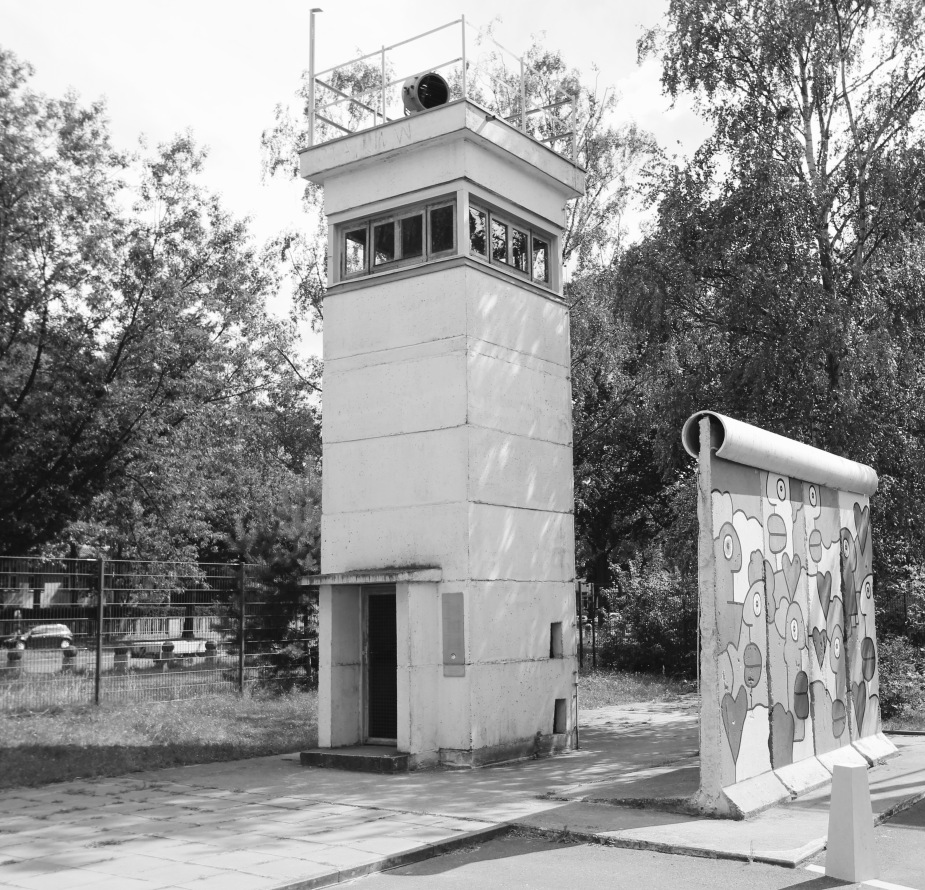 Kaiser Wilhelm Memorial Church ( Gedächtniskirche) – built as a protestant church in 1860-95, it was badly damaged in a bombing raid in 1943.

It has been restored in the context of saving it from falling down but left unrepaired as a memorial.

The spire was 371 feet tall, now it is 233 feet. With the people below providing perspective. 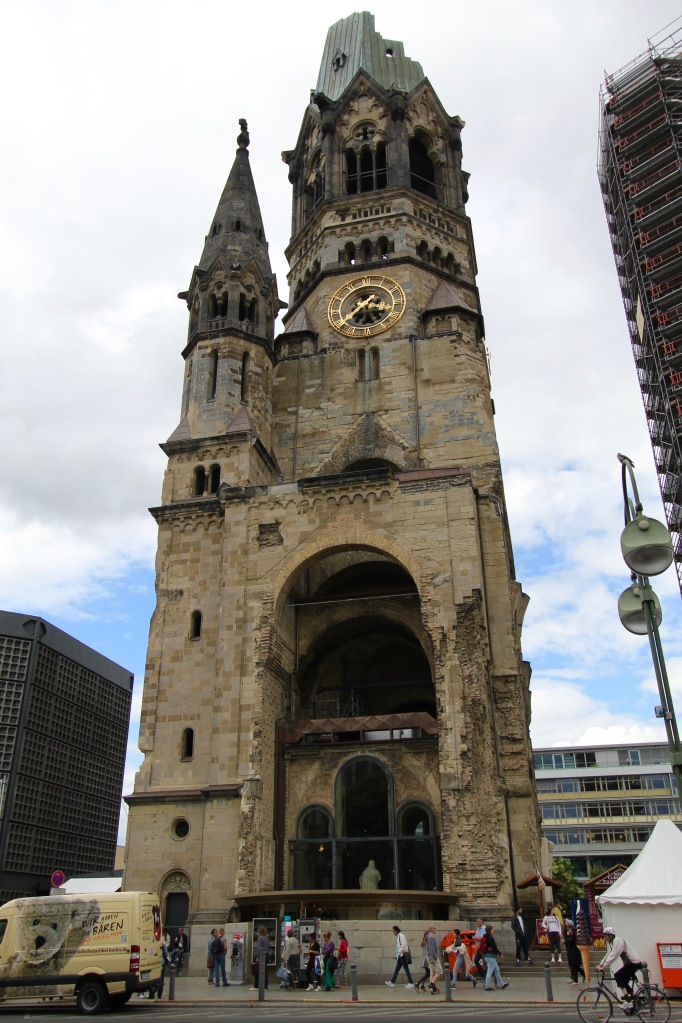 A beautiful first evening in #pompanobeach #residenceinnpompano in south Florida
#Savannah #georgia Day 2 #isleofhope #chippewasquaresavannah #ForrestGump
#TheOldePinkHouse in #Savannah for brunch with the most delicious appetizer ever (Southern BBQ Nachos), the fried green tomatoes and shrimp & grits were to die for
A fantastic first day in #savannah #georgia
We are off to our first vacation of just us since the Bahamas on New Years 2020 (which for us travelers is waaay too long). #savannah