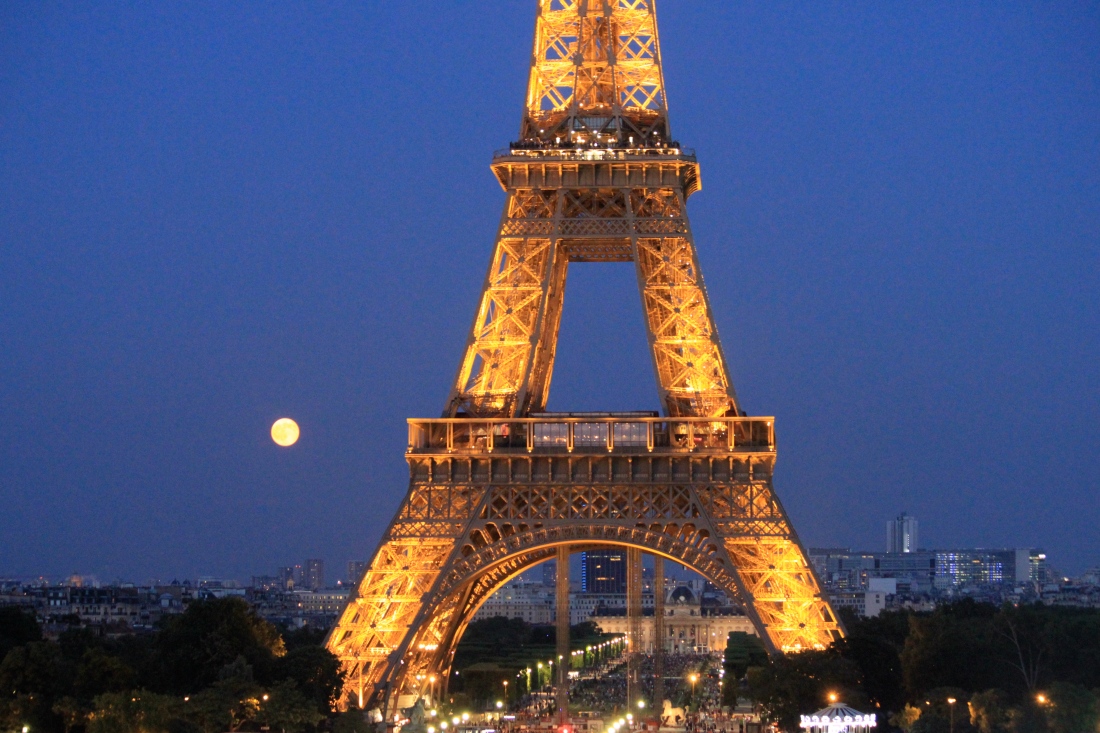 Okay, so I have another blog post on a trip to Paris here from a weekend trip we took in January, but there is just something about Paris that keeps bringing us back to this beautiful city.  That, and the fact that is is a 3 hour ICE train ride from Mannheim, Germany!

In June 2014, my parents and sister had visited us from the States.  Being their first time to Europe, I knew we had to take them into Paris, since we live relatively close.  Also, my sister’s birthday coincided with their trip, and I knew this would be a spectacular gift for her birthday, which was on June 13th.  So, we left Mannheim early on the morning of Friday, June 13th, and by mid-day we were in Paris.  After a Metro Train connection from the Paris Est rail station, we walked to our hotel, Mercure – Paris Eiffel Tower and checked into our room.  Since the hotel is only about 6 blocks from the Eiffel Tower, part of the birthday gift to my sister was ensuring that we had a room with a view of the Eiffel Tower, and our rooms did not disappoint!!

Once we recovered a little from our travels, we had booked a Seine River cruise and left to arrive at our meeting point for departure.  There are several Seine River tour operators, and you can buy your tickets at the dock locations.  However, to avoid long lines that occur, I highly recommend to buy your tickets online.  From there, you print out the tickets, and bypass the line, and just go to the line to wait for the boat.  After reading reviews on TripAdvisor.com, we selected our Seine River cruise with a company called Canauxrama, and were highly impressed.  Our cruise was a mid-afternoon cruise, which was a little hard to see some of the sights with the sun directly in our eyes.  But, as we headed back, we had great views with the sun at a perfect angle for picture taking.  If I had it to do over, we would have scheduled an evening cruise to see the buildings and monuments lit up, but there is always next time.

The Seine River is wider than I thought, and an excellent way to see Paris.

The Eiffel Tower from our Seine River cruise boat

After our Seine River cruise, we sat out for a walk around the Eiffel Tower.

I’ve been to Paris 4 times now, and I still cannot find the Eiffel Tower! I know it is around here somewhere?

The best view of the Eiffel Tower for pictures is at the Trocedero Square.  Since we had no real plans for the rest of the evening, we decided to watch the sunset and then wait until nightfall to see the Tower light up.  When dusk approaches, the tower is lit up with yellow lights showing the details of the Tower even at nighttime.  Then, at the top of each hour for about 5 minutes, everyone is treated with a spectacular light show, as hundreds of white twinkle lights appear making the tower glitter.  It is definitely worth the time to view this.  However, in the summer, the sunset does not occur until 9:30pm, the Tower lights up at about 10pm, and then the first twinkle light show starts at 11pm with the last one coming at midnight.  So, only two “shows” during the summer.  However, in the wintertime, when the sunsets at 5-6pm, there are more chances to see the wonderful lights!! 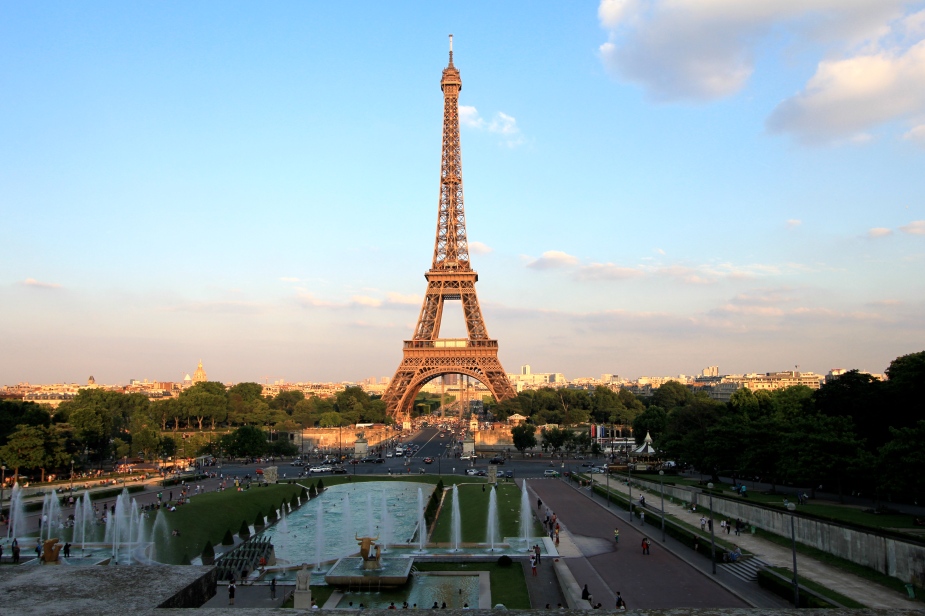 The Eiffel Tower at Sunset…but little did we know we were in for a nice show ourselves in the early evening.

I could see a lot of people behind the tower, but it wasn’t until I looked through the camera zoom lens that I saw how many! They had a terrific location to watch the sunset behind the Eiffel Tower.

As we were waiting for our light show, I started to notice a strange orange light appearing to the left of the Tower through my camera.  At first, I thought it was a cloud being lit orange from the sun, but then I realized that it was actually the moon rising!  And, I knew that if the moon rises when the sun sets that this must be a full moon!!!  I quickly did a Google search, and confirmed that yes, in fact, it was a full moon….and…that the next full moon to occur on a Friday the 13th would not be until the year 2049!!  Talk about an unplanned, perfect place at the right time….and, it happening on my sister’s birthday!!  So, as the moon rose and the sky turned dark, the Tower was lit up with its yellow lights, and I was able to take dozens of fantastic pictures.  Here are a few of those… 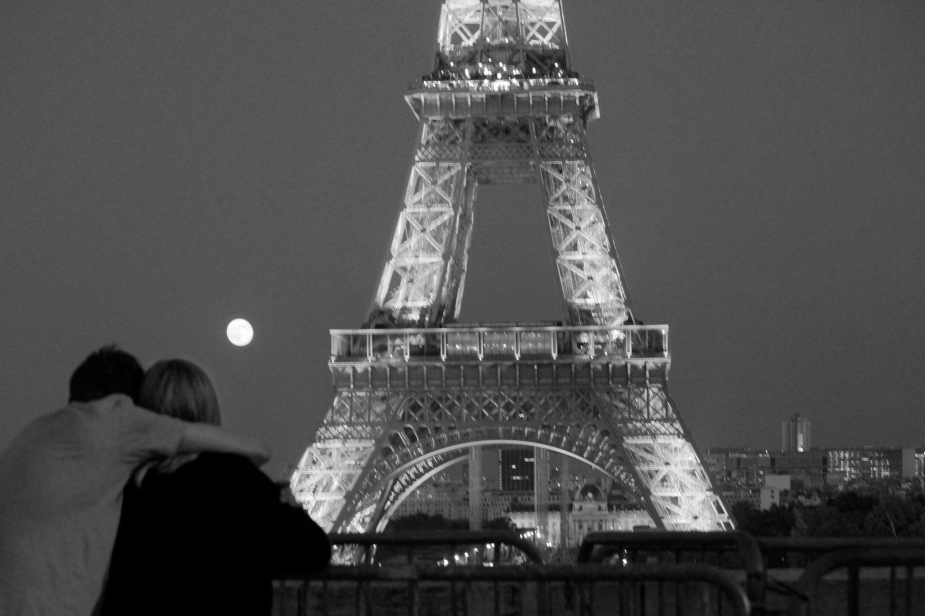 After seeing this breathtaking and unplanned sight, we started our walk back to our hotel.

I love how the Eiffel Tower can look so different at night and from different angles.

The next day after breakfast at the hotel, we set out for our first stop to Montmartre to see the Sacre Coeur and the artist village on top of the highest elevation in Paris.  Since we had a long day ahead of us, we took the cog train up and down the hillside, which helped also to bypass the pushy street vendors here.  NOTE:  you will see several guys with small strings in their hands.  They come up to you very friendly and want to tie the string around your wrist, something like a “friendship bracelet” then, they start to harass you for 1 Euro.  Recommendation:  just walk briskly by them, put your hands in your pockets, and just say “No!” in a firm voice.  For Americans, this seems rude, but it tells them you are not interested.  But, if you do want a thread bracelet and are willing to pay the Euro, then feel free to stop.  But, do not let this distract you from visiting a very beautiful section of Paris.

At Montmartre and the Basilica of the Sacré Cœur (Roman Catholic Church built between 1875 – 1914.

After our stop at Montmartre and some souvenir shopping, we went back to the Metro to go to the Arc de Triomphe.  My Dad is a history buff, and he was amazed at seeing this structure, built by Napoleon, and where Hitler and later the Allied Forces had marched through.  Today, it is a landmark icon in Paris, and is at the center of a large traffic roundabout.

Given that it is a large traffic circle around the Arc de Triomphe, it took great patience to finally get a shot without any cars passing by

From the Arc de Triomphe, we started walking down the Champs Elysees.  Our goal was to walk the 4-5km down the street to the Louvre Museum.  It is a gradual downhill walk along a very wide and sometimes crowded walkway with a 6 lane highway down the middle.  On both sides, are some of the most recognizable stores in the world.  It was a great opportunity to window shop, shop for gifts for people back home, and to stop for ice cream and drinks along the way passing the occasional street performers.  About halfway down the avenue, the shops end and a wonderful park area is found.  This is a great place to find a bench to get a quick rest and to watch people pass by.  We ended up about 2 hours later at the Louvre Museum, walking around its beautiful gardens and marveling at the beautiful architecture of the buildings and artwork within the gardens.  Also, we could not have asked for more perfect weather with partly cloudy skies, a light breeze, and temperatures in the low 70s….not bad for the second week in June! 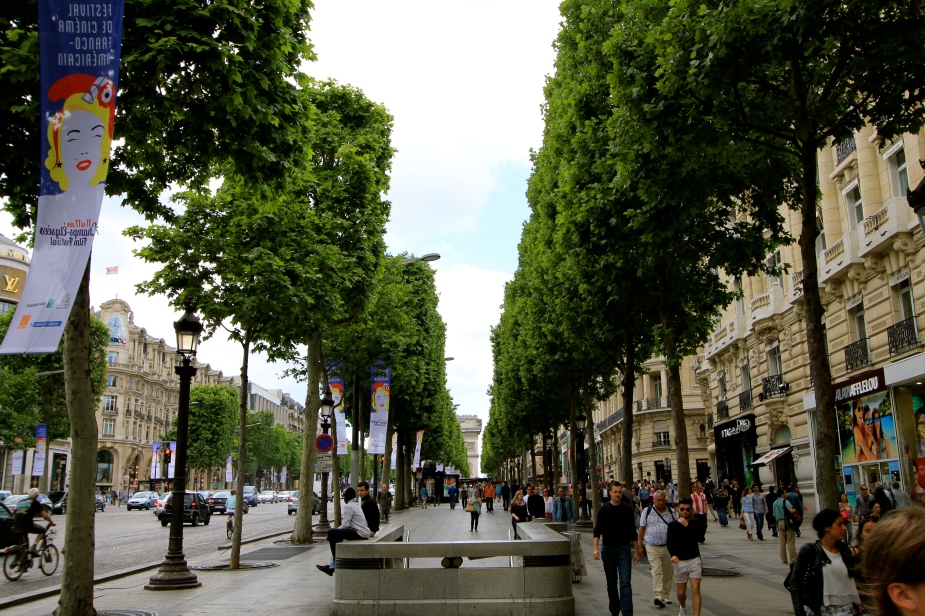 The oldest monument in Paris is a 3,000 year old obelisk, which was a gift from Egypt. It stands in the supposed location of where Marie Antionette was beheaded. 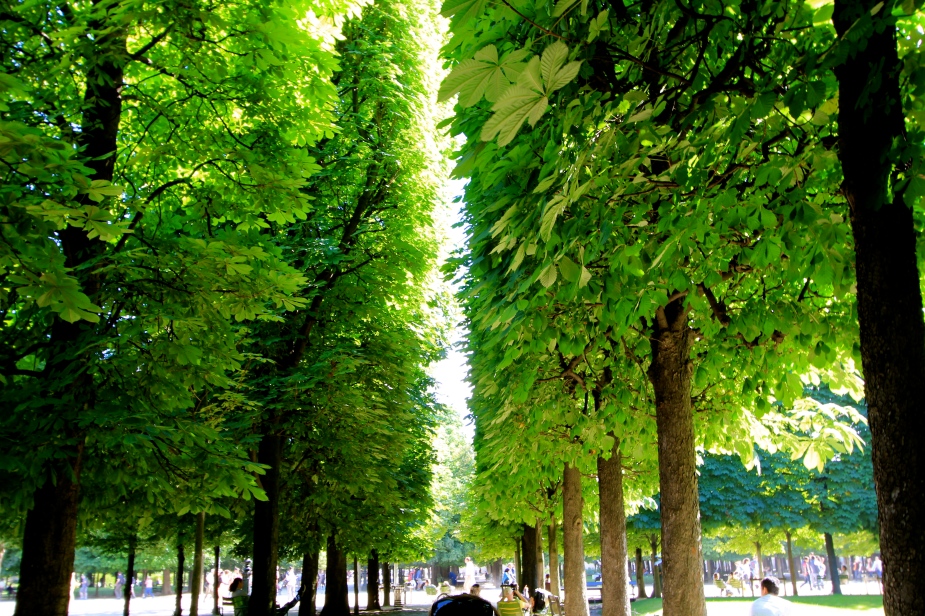 Even the trees in the park seem to be works of art themselves. Finding a park bench is a great place to people watch. 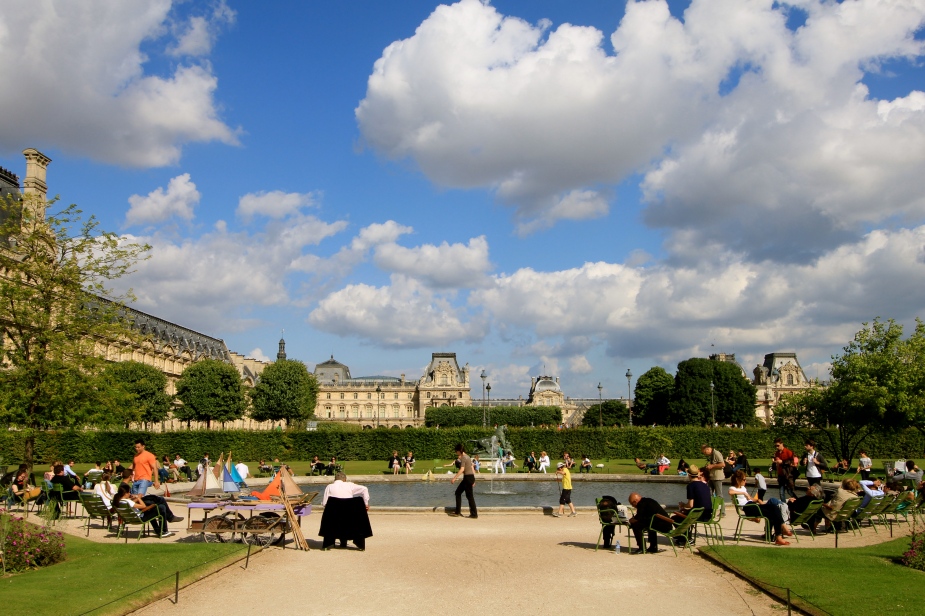 As we are approaching the Louvre Museum

A beautiful day for a walk outside of the Louvre Museum

Just on the other side of the Louvre Museum, crossing back over the Seine River is a bridge that my Dad has become fascinated with since the first time I posted pictures of it.  It is the locks of love pedestrian bridge, where lovers will place a lock with their names written on it on to the bridge railing fence.  Then, they will throw the key into the river.  This romantic gesture has created what I think is a fascinating piece of art in itself with the colorful and varied locks along the bridge.

The “Locks of Love” Bridge near the Louvre Museum. A few days earlier, two sections of the bridge had fallen from the weight of the locks.

Absolutely love how the rays from the sun appeared in this photo, which adds an interesting view of the “Locks of Love”

Our final stop of our walking tour of Paris on this Saturday before heading back to our hotel was to the Notre Dame Cathedral and the Latin Quarter of Paris.  We did not walk around the cathedral, but did stop to take pictures in the front square before the cathedral. 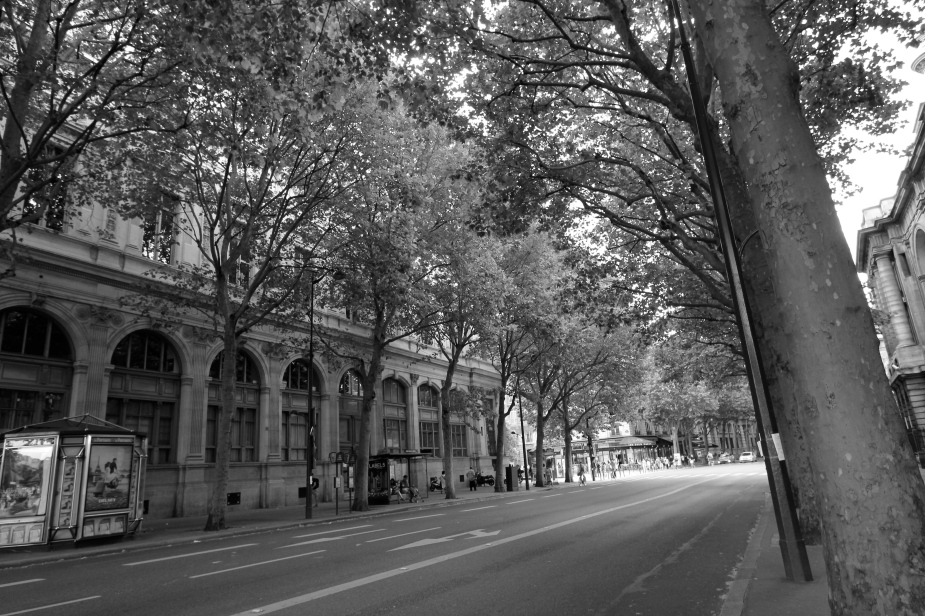 Take a picture of any street in Paris and process it as black & white, and you create an instant timeless photo of a Parisian street

Our last day in Paris was Sunday.  We checked out of our hotel, but left our luggage at the front desk, since our train back to Germany was not leaving until 5pm.  This was our day to go to the top of the Eiffel Tower.  The Tower opens at 9am, so we arrived at 8:30am to an already lengthy line of about 100 people in front of us.  It seemed like a long line, but the line moves relatively fast.  Like all tourist attractions in every city, you can buy tickets online to avoid the ticket line.  However, I learned that the online sale of Eiffel Tower tickets sell-out at least 2 weeks in advance.  So, we had to wait in the ticket line first, then wait in the line for the elevator up.  RECOMMENDATION:  if you want to go to the top, arrive early in the morning, because as the day proceeds, it gets very crowded, and the lines grow longer.

My Dad & Wife went to the middle section of the Tower, while my Mom & Sister went with me to the very top.  At both sections, I was able to take plenty of pictures, many of the attractions we had seen the day before during our walking tour….. 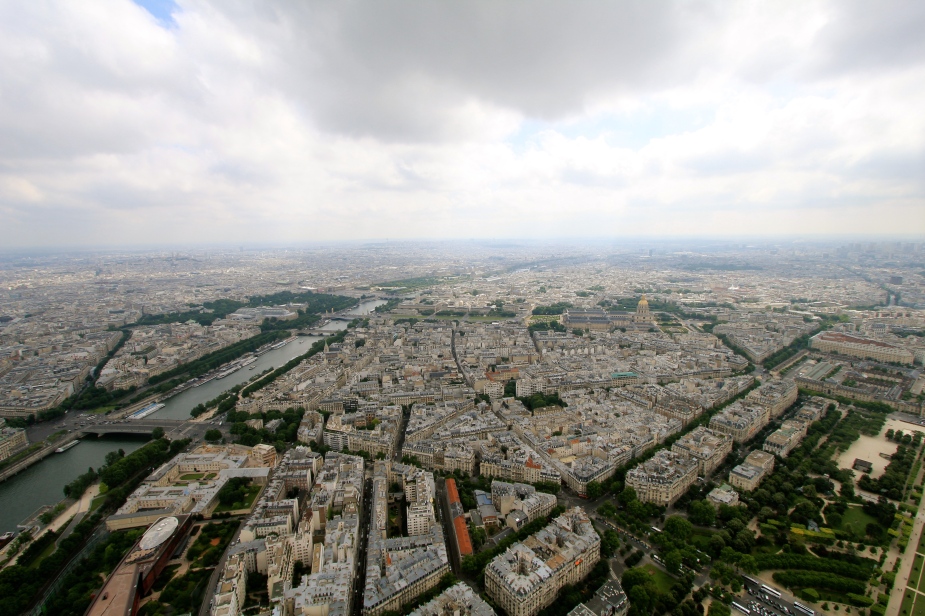 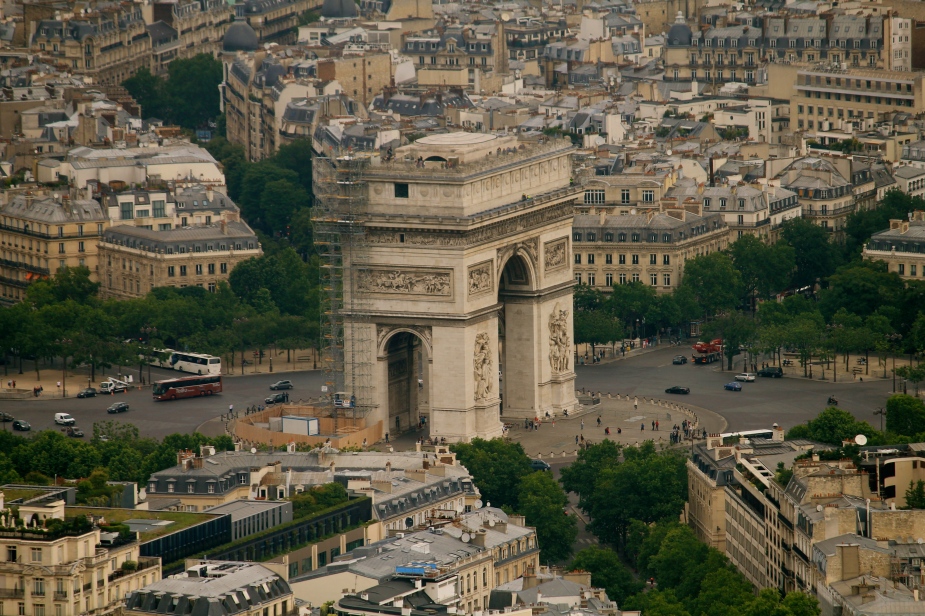 View of Trocedero square from the Eiffel Tower

From the top of the Eiffel Tower, the Metro Train looks like a child’s toy

View from the Eiffel Tower of the River Seine

It is easy to forget that Paris has a downtown modern-day skyline because it is separated from the tourist areas.

We left Paris at 5pm on Sunday, and made it back to our home in Germany at about 9pm.  It was an awesome 3-day / 2-night trip to Paris, and am happy we got to share this beautiful city with my Parents & Sister, and to cross a bucket list city off their list.