We arrived in Sydney late in the evening of December 13th, and checked into the Four Seasons Hotel (more on the hotel in a future post). The next morning, we opened the curtains in our hotel room. After our eyes adjusted to the bright sunshine flooding into our room, we saw this glorious view!

It was at this moment that our trip had become very real, in that we no longer were looking at this iconic structure in pictures, but it was the real thing. 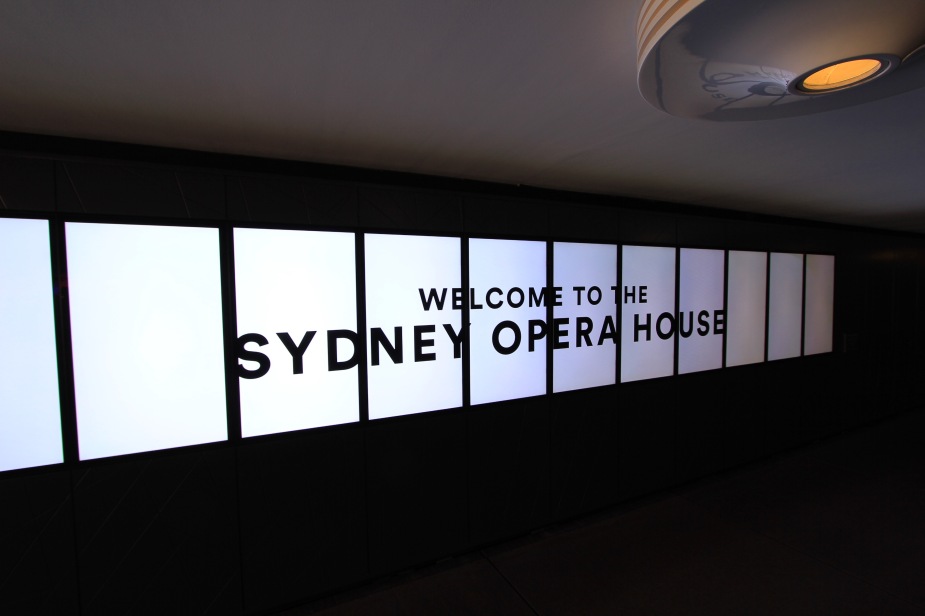 TIP:  Touring the outside of the Opera House is free!!

Our first morning in Sydney, we spent the day getting over our jet lag by staying near the hotel and touring the Circular Quay (Harbour Area). The weather was stunning! We had just left the wintertime of Germany, and now we were in the middle of summer.

Water naturally attracts people. Add an iconic structure known the world over, then the attraction grows exponentially. This area of the Sydney Harbour is known as “Circular Quay”. The word “Quay” (pronounced as ‘Key’) is an Old English term that means the same as “Wharf” – or area where ships dock.

The Opera House sits on an outcrop of land known as Bennelong Point. Before, where the Opera House now sits, it was an island. Sydney created the Point in the early 1800s.  To create the shipping wharf, the city filled in the area between the island and mainland with rocks.

On the other side of the Point from the Business District is the Royal Botanical Gardens (more on the Gardens in a later post).

Today, approaching the Opera House, the area in front is a wide and open pedestrian walking district with various shops and restaurants around the Quay.

The view of the Sydney Harbour changes as you walk around the Quay. The above picture was our view looking back from the Opera House at the central business district of Sydney. Our hotel is the brown, high-rise building on the right in the above. 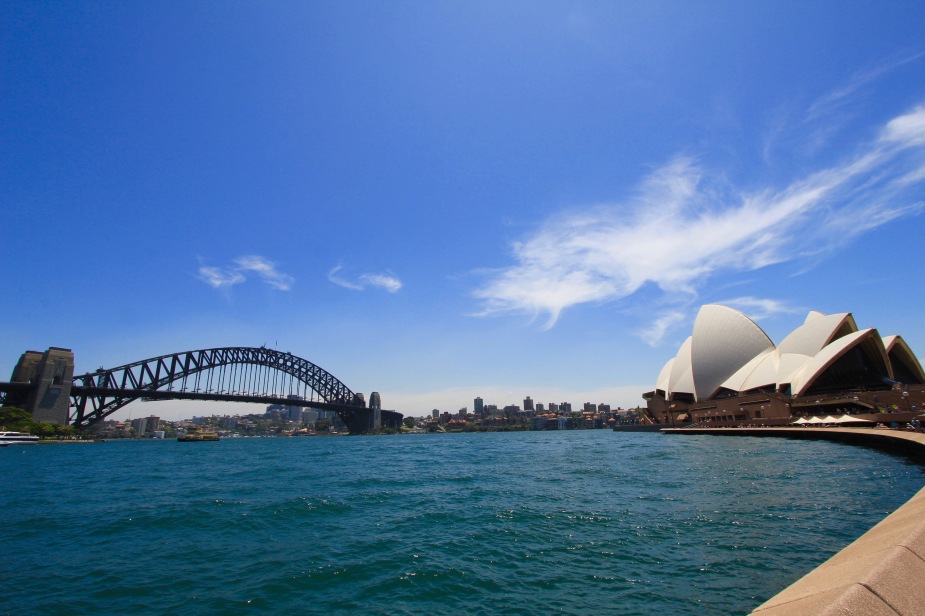 The other iconic structure in Sydney is the Sydney Harbour Bridge, which the locals affectionately call ‘the Coat Hanger’.

The Circular Quay is behind the Opera House & in front of the bridge on the left side in the above picture. The trick is attempting to take one picture with both iconic structures in the same frame. 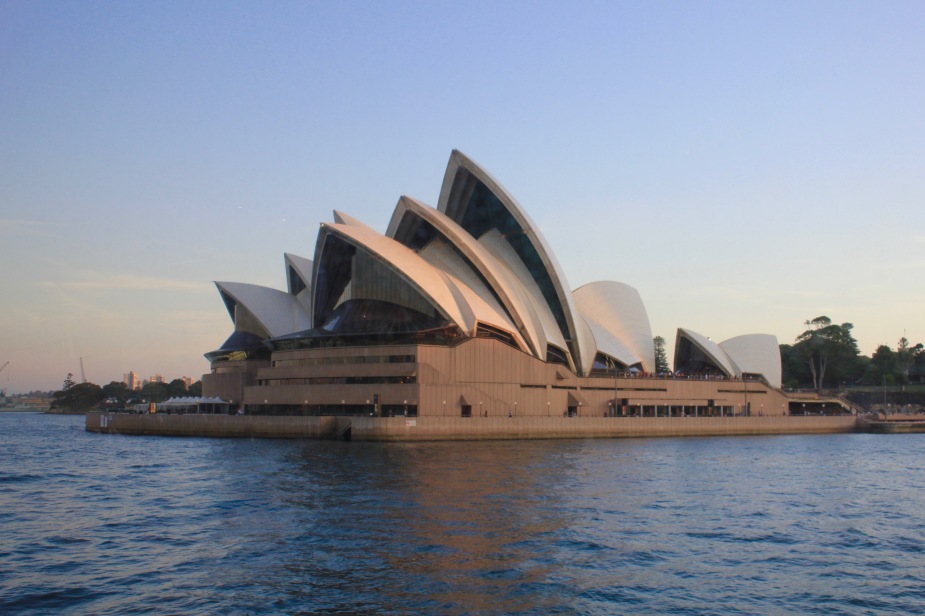 TIP: Taking a water taxi across the Harbour gives excellent views of the Opera House from the water.

Taking a Sydney Harbour cruise is an excellent choice because the boat slows down near the Opera House for excellent photo opportunities. 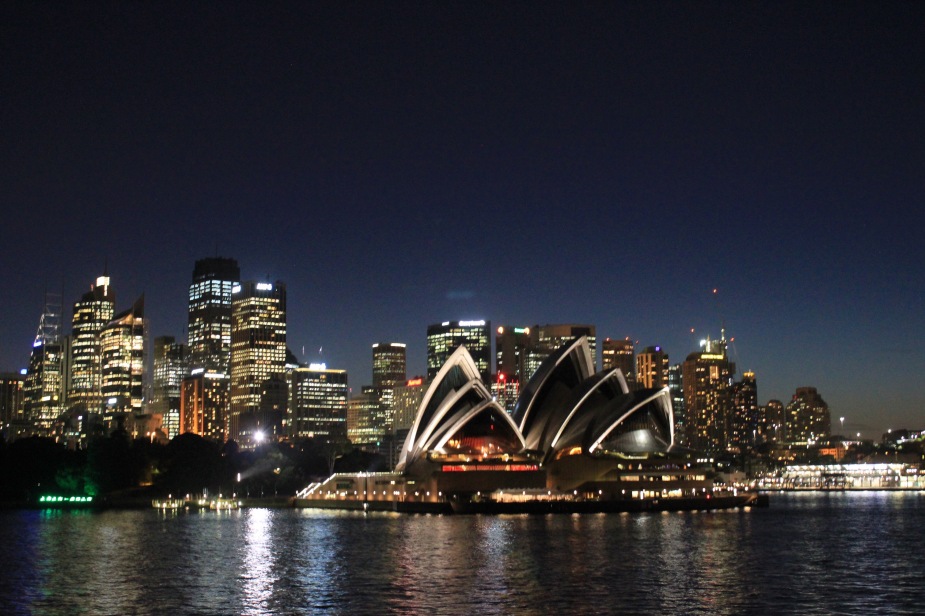 The Harbour Cruise we took was a dinner cruise that was arranged by the tour company, Viator. However, the cruises can be also booked direct from the Captain Cook Cruises stand located at the Circular Quay terminal.  The dinner cruise includes dinner (duh!), but afterwards, you get an excellent view of the Harbour, the Sydney Skyline, the Coat Hanger, and the Opera House at night.

Our next morning, we were fully adjusted to the 10-hour time difference from Germany, so we walked back to the Opera House to tour inside…and, yes…it was another absolutely gorgeous day (temps in the low 80s with no humidity).

Various performers provide concerts at the Opera House…we only wished Josh Groban performed in December instead of April.

Annually, 1500 performances are given, attended by 1.2 million people!

The Opera House is 600′ long and 394′ wide, and consists of several performance venues under its roof:

The Main Concert Hall also contains the world’s largest organ with 10,000 pipes (even though this was disputed by a German tourist in our group).

The performance halls are under the “shell” sails of the Opera House, which can be accessed through doors of a large hallway the encircles the interior. 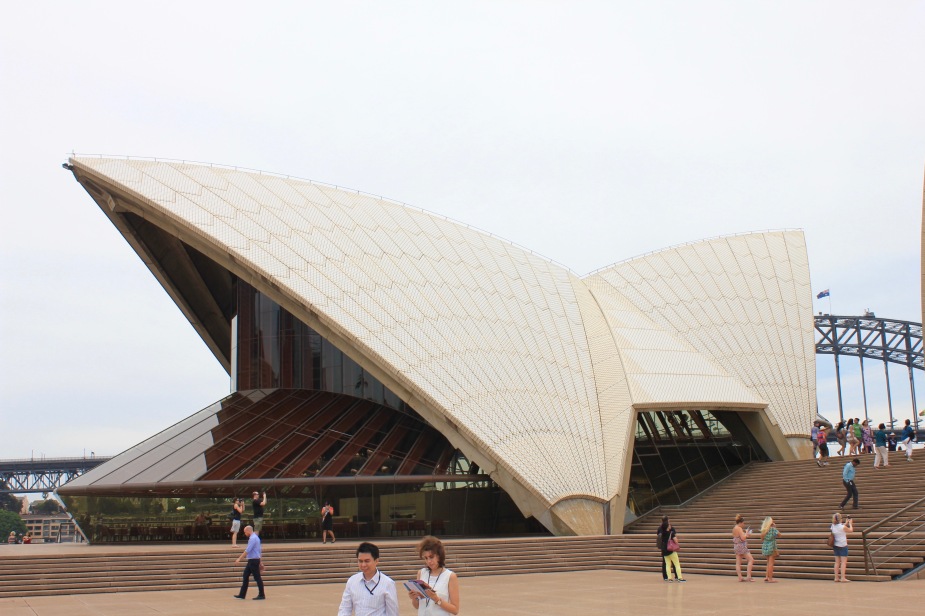 The city of Sydney began planning in the 1940s in an attempt to provide a cultural performance center. Finally, in 1955, an international competition began to solicit architectural designs from 233 entrants from 32 countries.

In 1957, the winning selection was from a Danish designer named Jorn Utzon. His design was very unique in that it provided a nautical feel, given its location on the Harbour front. 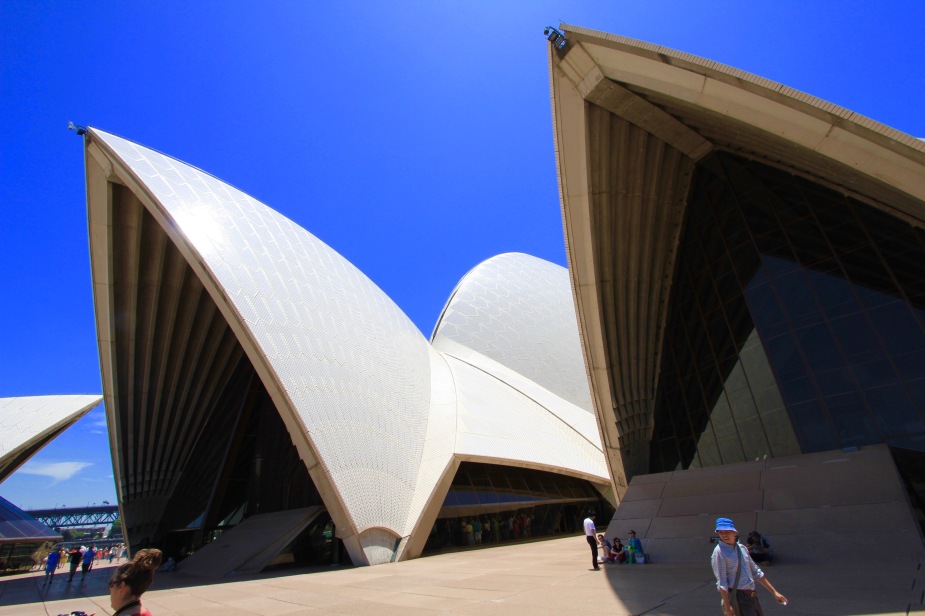 The winning design was a concept. The original shells were more vertical, but not possible to construct. Structural engineers began to analyze the design to determine how to modify it to allow for construction and to support the interior performance centers.

To make the building possible, the engineering solution was to use a sphere as the basis of the design to cope with the structural stresses. All of the “shells” assembled together would form a sphere.

Queen Elizabeth II on October 20, 1973, officially opened the Sydney Opera House to the public. In 2007, the Opera House was designated as an UNESCO World Heritage Site.

From a distance, the Opera House’s color is an uniform white. However, in fact, the exterior consists of two different colors (glossy white & matte cream). These colors were chosen to prevent the Opera House from blinding people in the bright Sydney sunshine.

Up close, the slight color difference is seen. Across the entire Opera House there are 7″ tiles that cover the exterior that were manufactured in Sweden. The total number of ceramic tiles is 1,056,006 (yeah…over a million tiles!). 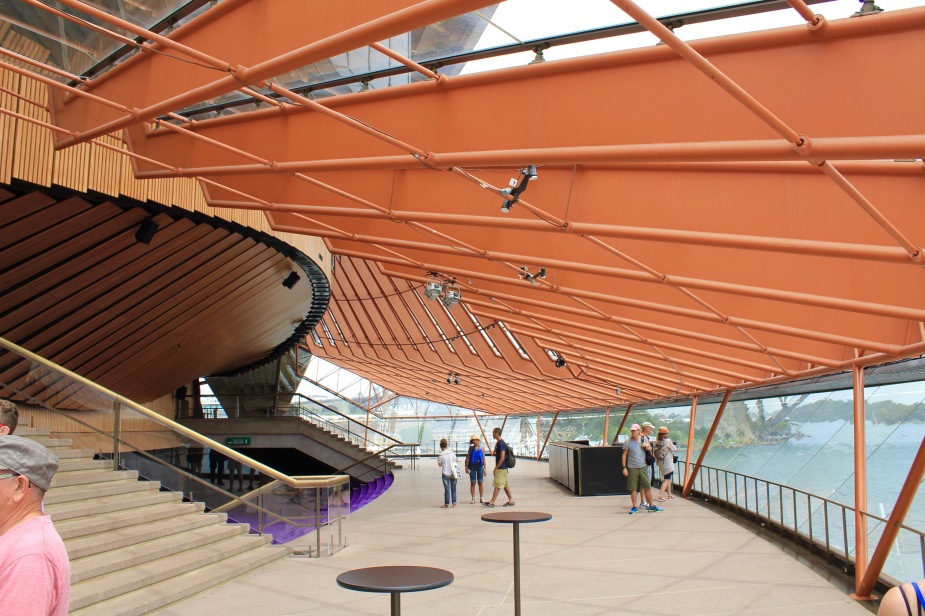 Various inside tours are available from the Opera House. All tours are offered in English, German, French, Mandarin, Korean, & Japanese from 9am to 5pm daily.

We chose just the House Tour.

The only restriction of the tour is that no pictures are allowed to be taken inside the concert halls. This is due to copyright restrictions associated with stage productions.

The interior of the Main Concert Hall is tremendous. The hall has a vaulted ceiling creating an unobstructed view of the stage. The acoustics are outstanding, as white birch wood coves everything. The concept is like being inside of a wood instrument (i.e., violin or guitar).

We spent two more days in Sydney before leaving for our 29-day cruise to New Zealand and the South Pacific Islands with Holland America (future posts to follow)…our final view from our hotel was of both the Opera House and our cruise ship.

Sydney quickly made our list of Top 10 Cities in the world that we have visited. It is a beautiful city with friendly people and iconic structures known the world over.

Few buildings in the world are as recognizable as the Sydney Opera House. Whether you like the performing arts or not, seeing the building in person will not disappoint.