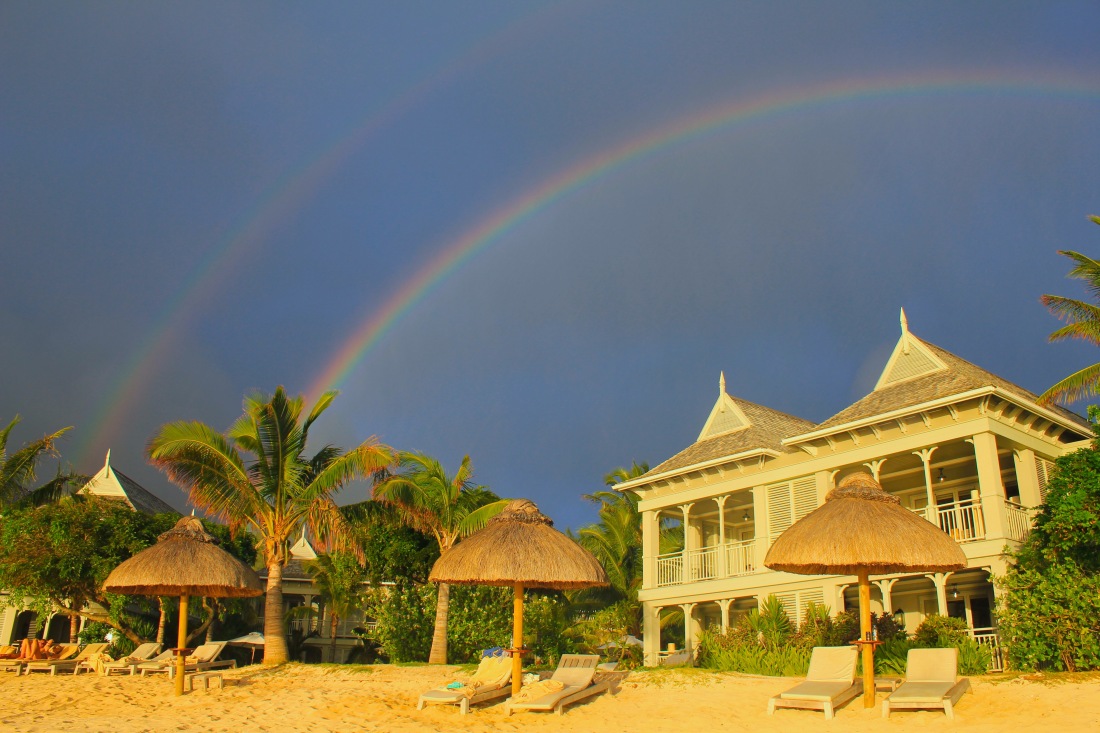 Okay, I will admit it…being an American, I have never really heard of Mauritius before.  When we decided to take a vacation to somewhere warm over the extended Easter Holiday and for Amanda’s birthday, we heard a lot of good things about Mauritius from our fellow German colleagues and from information we found online.  But, nothing can really prepare you for seeing such a beautiful place until you are actually there and can see it in person….

The above quote is from Mark Twain who in 1896 visited Mauritius as part of his tour of various islands in the Indian & South Pacific Oceans.  I saw this quote before leaving, and thought this was a writer’s attempt to exaggerate his claims.  But, after our first hand knowledge, we both agree that we have to really think hard to find a more beautiful place that we have ever been before?

Click on this blog post, you can read about how we chose Mauritius and our planning activities to get here…. 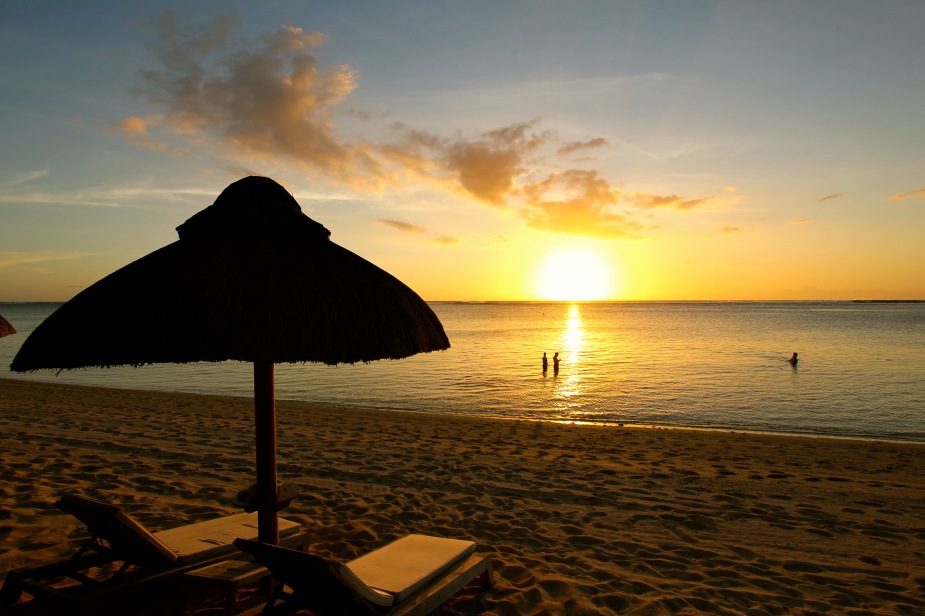 Our first sunset in Mauritius 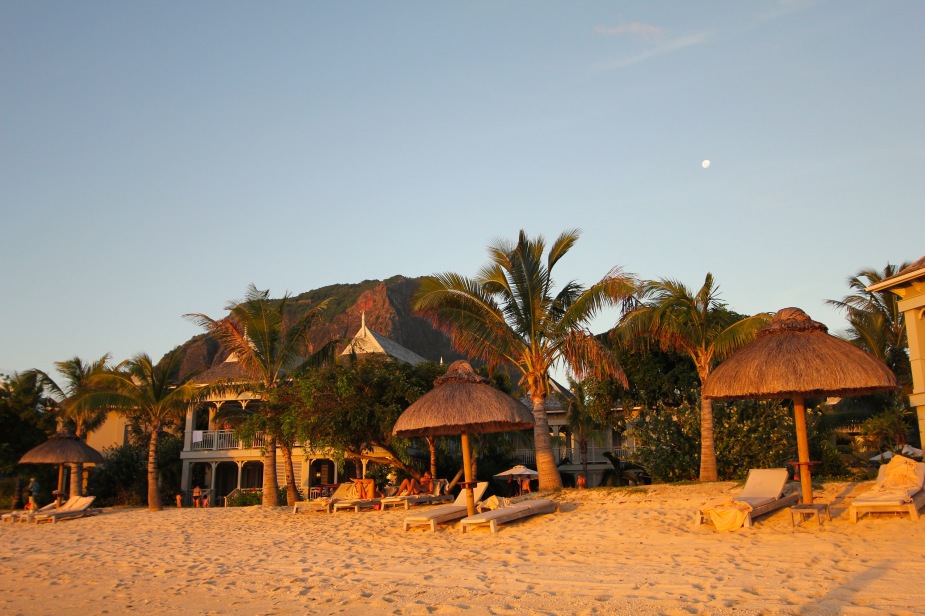 Standing in the water looking back to our villa. The mountain is Le Morne and is about 1200 feet above sea level. This southwestern area is a protected national park, so our resort was surrounded by natural rain forest. At night, we would see the Mauritian Flying Fox (fruit bat) that has a wing span of 2 feet & looked just like the Batman symbol when flying. I was relieved to read they eat fruit…but, still… 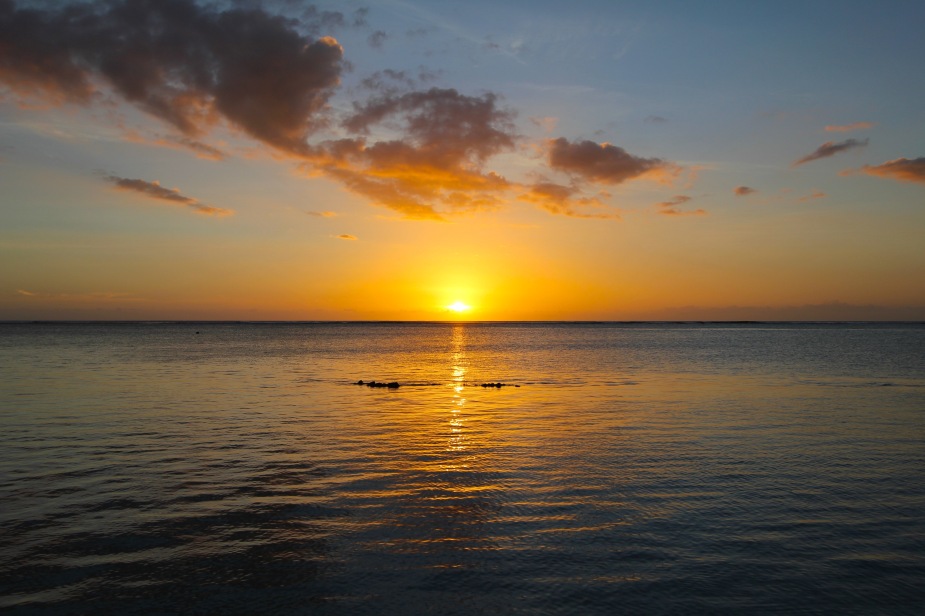 A coral reef encircles the island, meaning that the waves break off shore and the internal lagoon area is shallow with smooth, crystal clear water. 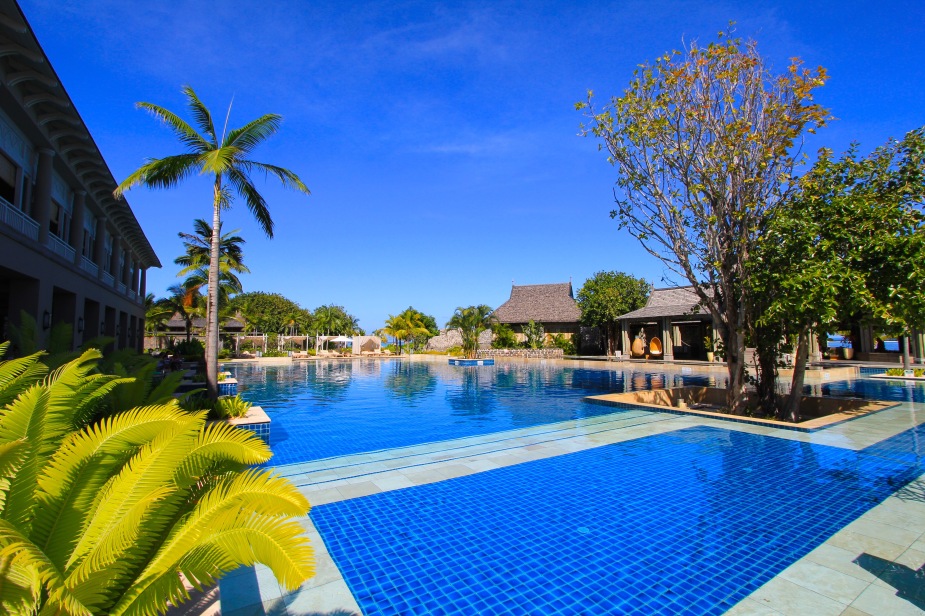 Our second day in paradise we awoke to an absolutely stunning blue sky, which made everything around the resort and beach sparkle. This was our view each morning for breakfast. 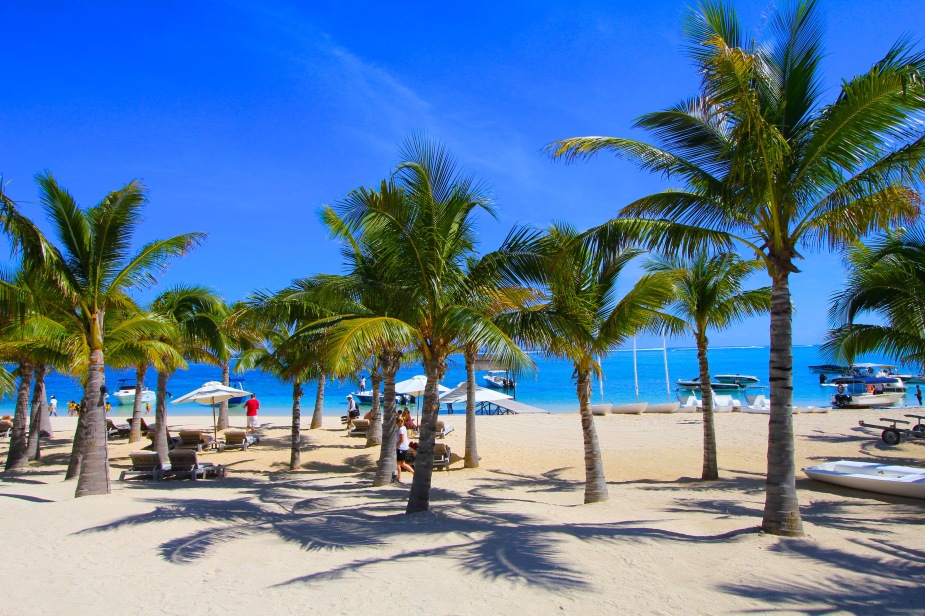 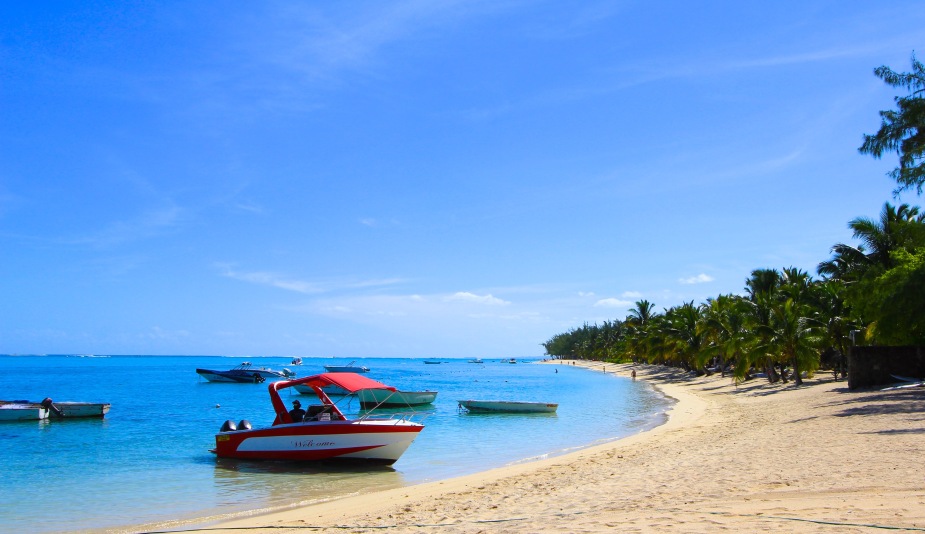 Several boats for hire to tour the island, go fishing, skiing, para-sailing, or venture to a nearby island for a private picnic. 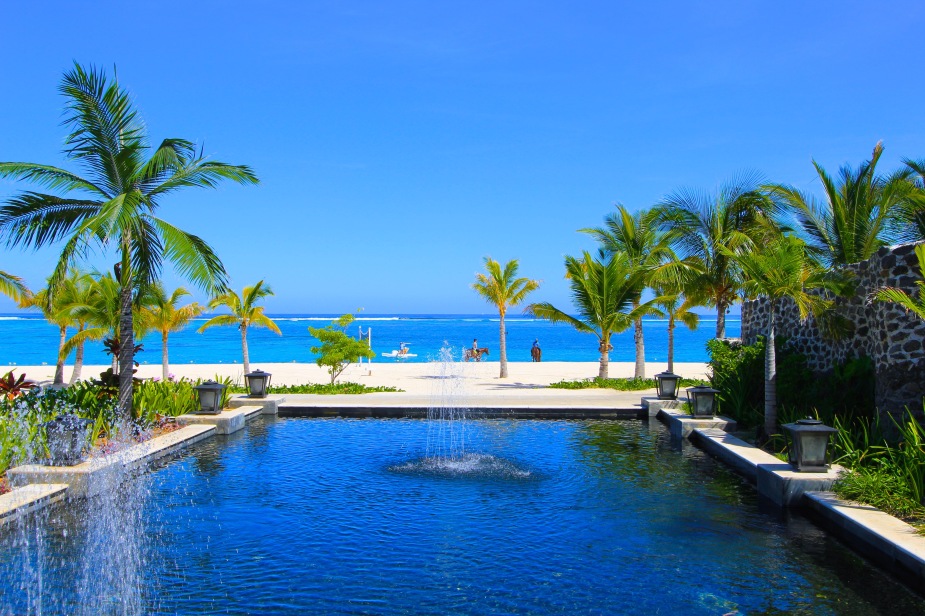 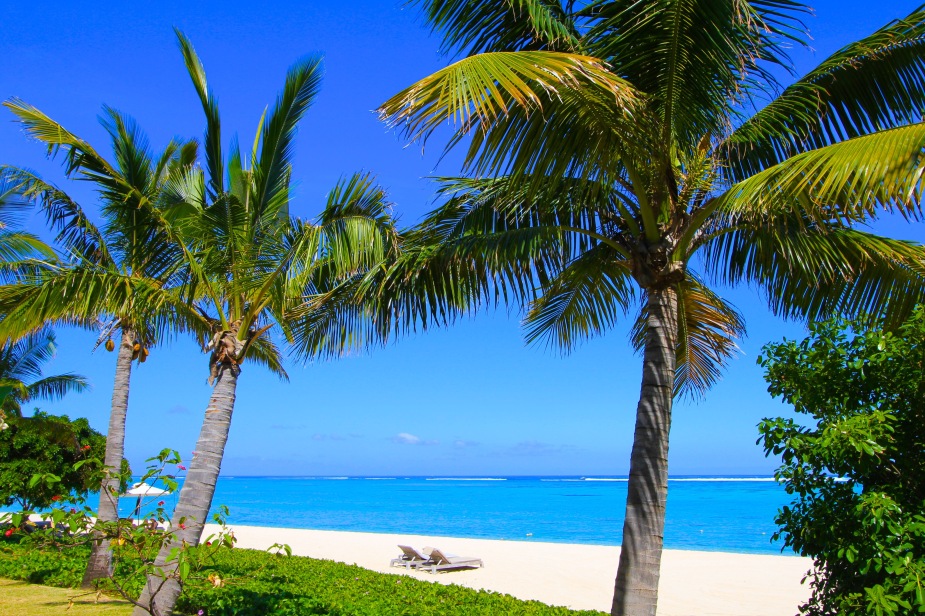 Our second day had the best weather, as today we had no clouds. The other days there were some spotty clouds, but nothing bad at all. Each day brought different lighting in the sky that made everything look entirely different. 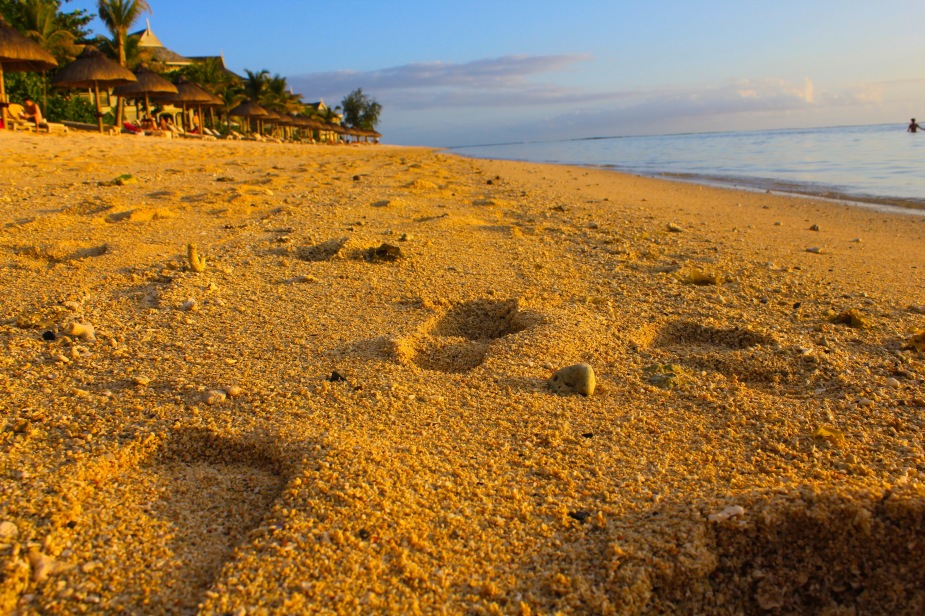 The sand is fine, coral sand that is white, but at dusk the sand captures the color provided by the sunset. 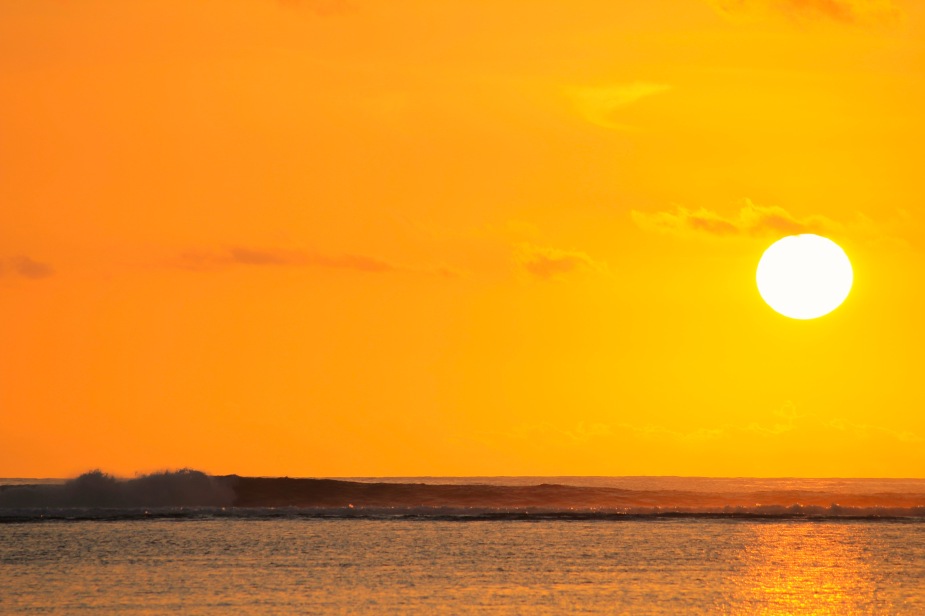 Here, I zoomed in to see the waves crashing out at the coral reef in front of the sunset….the distance out to the reef varies, but where we were it is about 500 feet away. The surf has waves about 10 feet high, and I could walk almost out 2/3rds of the way and still touch bottom. 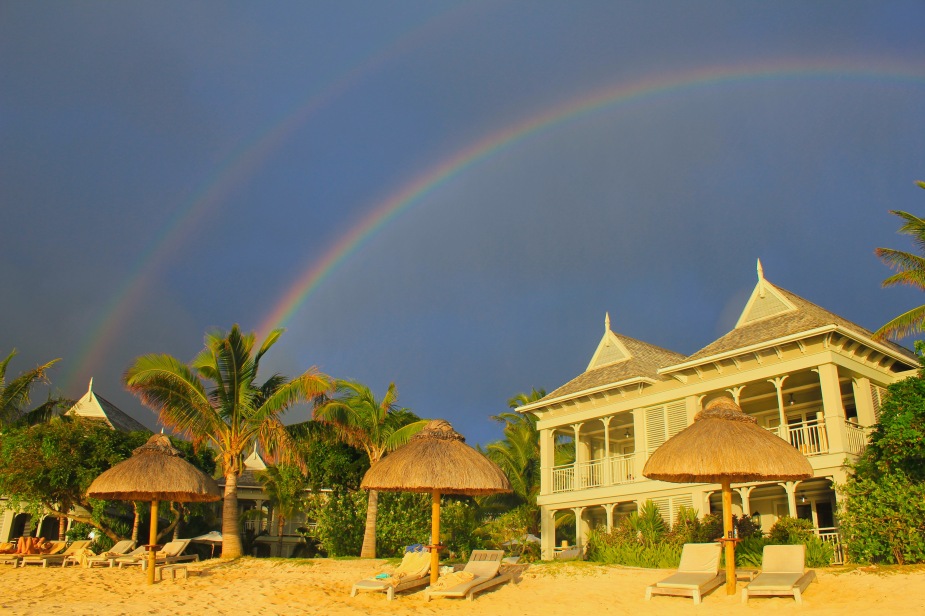 On our third evening, I went out to take sunset pictures, and it started to rain. Since I was staring into the sun, I thought, there should be a rainbow behind me…and I am thankful I turned around as I captured the double rainbow that was only visible for one minute. 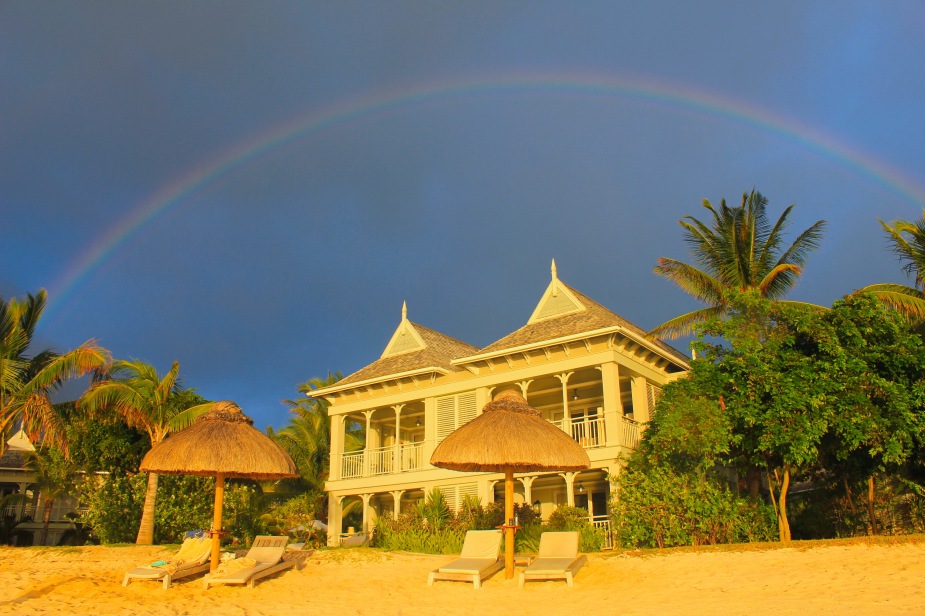 I sent this picture to the St. Regis Resort, and they posted it on the Facebook page…..sometimes…it pays to turn around when taking pictures!! 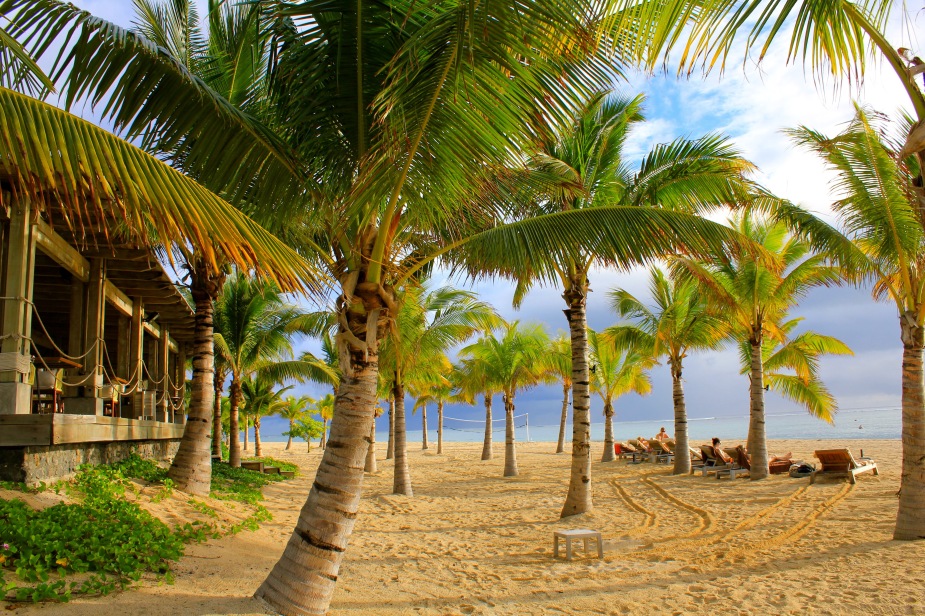 On the other side of the bar area is the beach. And, by the time I got here, the weather had broke and we had a very pleasant afternoon & evening. 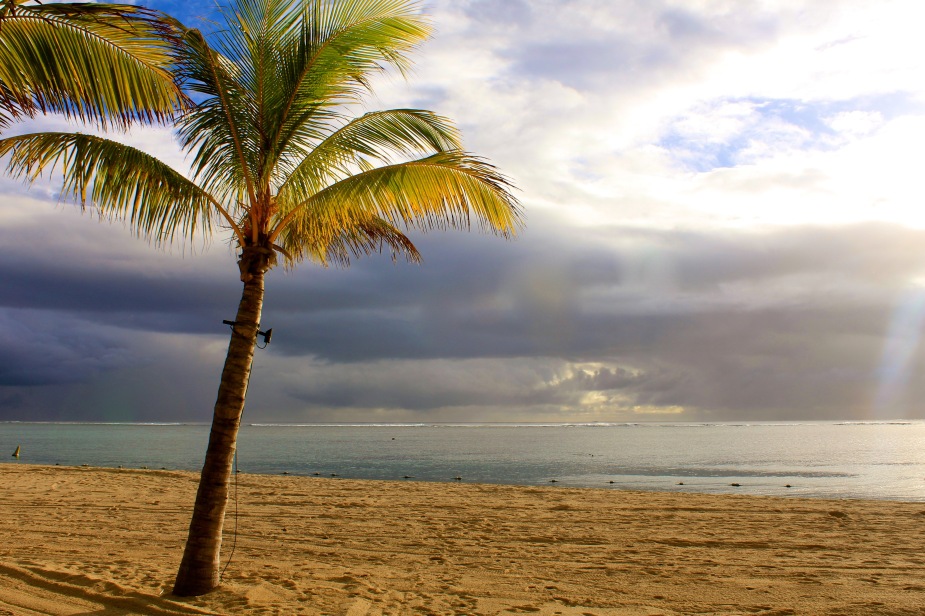 The views are absolutely stunning. You would have to try very hard to take a bad picture here. 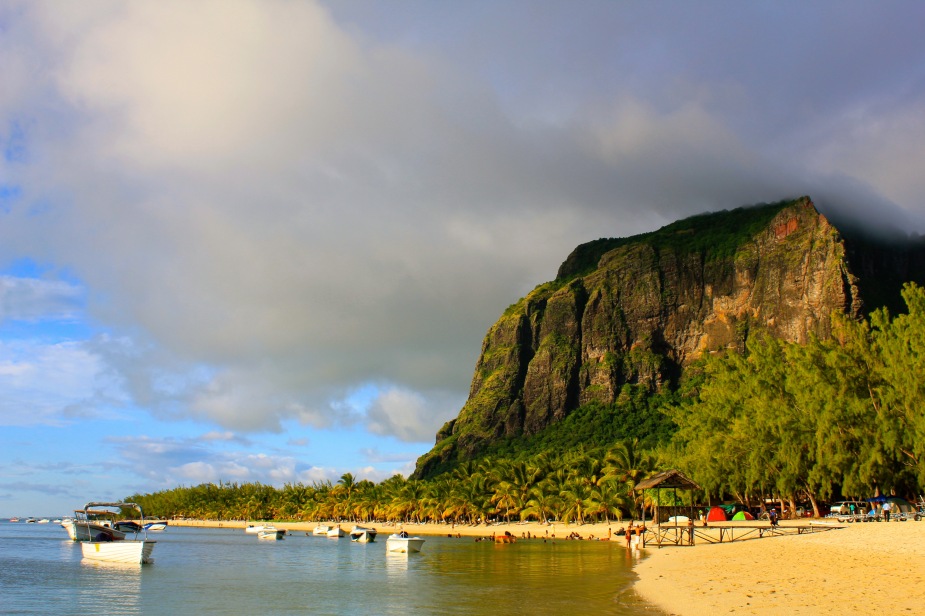 There are 1.2 million people in Mauritius. It has one main island, and several smaller islands nearby. The island has 90 miles of white, sandy beaches. The #1 industry is tourism & #2 is sugar production, as most of the island is covered in sugar plantations. First settled in the 1500s by the Arabs, then Portuguese, and later the French and British. There were no original people on the island. Either they came to live here or were slaves to work the sugar fields. In the 1830s, slavery was abolished, but the French and now at this time the British would bring indentured servants to the island from Africa or India. Today, the population is very mixed with African & Indian heritage people, and most people speak French, English, and mixed type of Creole language. With the mixing of cultures, there are numerous religions found here too from Hindi, Buddhism, Muslim, & Christianity…all living in peace…but, then again…it is paradise! 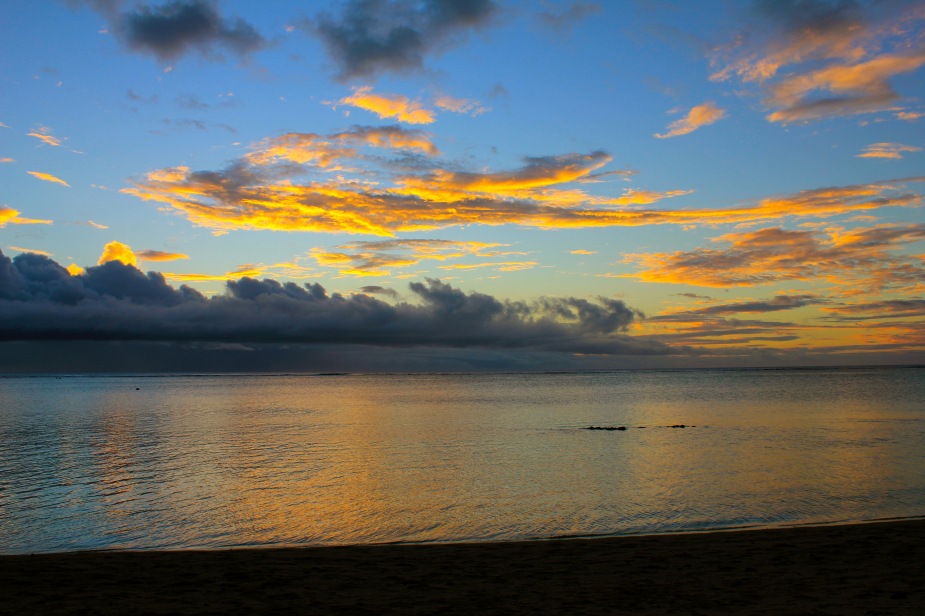 And, our last picture of the sunset….the next morning, we met our driver at 5am to take us on an hour drive back the airport for our return flight. From door-to-door from our room to our apartment in Germany, it took 19 hours. Although, it makes for a long trip, the payoff is so worth it…so much so, we both believe we will be back someday….