In May, after leaving Rome, we traveled to Florence, Italy as part of an excursion with our cruise.  Our cruise ship docked in the port city of Livorno, Italy where we boarded our tour bus for the hour drive to the city of Florence.

Livorno being a port city, it is a working class area fully dedicated to shipping.  As we began to leave Livorno, the landscape began to change as the buildings were replaced by farmlands and rolling hills.

As we entered the Florence area, the traffic started to build again as we passed through the more modern part of the city, headed to the historic old, center town.  Crossing through a hillside park, the view of the Duomo Cathedral of Saint Mary came into view along with the red, clay roof tops of the old part of Florence.

A smaller, but just as beautiful church is the Santa Croce Church (Church of the Holy Cross). This is the largest Franciscan church in the world. Franciscans are a branch of Catholics that follow the teachings of St. Francis, which preach about the poverty of mankind being the pathway to heaven versus owning worldly treasures.
But, what is really famous about this church….it is the burial place of the following greats: Michelangelo, Galileo, Machiavelli, and many others!

We parked and then walked to the plaza where the Santa Croce Church is located.  From here, we had three hours to tour the city.  I went to explore the area and take pictures, while my wife and her Mom went on a shopping spree.

The view from standing at the door of Santa Croce

After leaving the Santa Croce area, I made my way to the Arnot River, which flows through the center of Florence.  My specific destination was to see the Vecchio Bridge, which is the oldest bridge in Florence.  What’s cool about an old bridge?  It was built with shopping stalls along the walkway and above it were passageways where the Royal Family would cross from their palace to the center of town for business.  The facade of the shopping structures are still present with their colors and architecture adding the beauty of the city.

This bridge is called the Vecchio Bridge and was constructed over the River Arnot in 996 (yep…over a 1,000 years ago). It was constructed to allow the Royal family at that time a passage way from their palace, across the river, to the town center. They would walk across along a top passage way, while below it were various sellers of meats and items for sale. Today, the Vecchio Bridge still has the vendor stalls along both sides for the many tourists that pass through.

The view from the Vecchio Bridge over the River Arnot

From the Vecchio Bridge, I made my way to the Palazzo Vecchio, which is now the location of the Town Hall Building.  But, the famous part about this area is all of the 15th to 18th Century statues surrounding the Palazzo, including the most famous statue in the world, Michelangelo’s Statue of David.

At the Palazzo Vecchio, which is a castle built by the ruling Medici family in the 13th Century. The building is now the Town Hall. Outside the entrance stands a replica of the Statue of David by Michelangelo.

This replica is the same size of the real one that is now located inside a museum nearby (the wait was 2 hours to get inside, so we had to skip that). The original statue stood in front of this building from 1529 to 1851. It was made from one solid piece of marble 6.4 tons in weight and 17 feet tall. The attention to detail is amazing as up close you can see veins, strands of hair, etc….all made from a hammer and chisel.

Granted, the Statue of David that is here is a replica, but it is still impressive to see nonetheless.  For the original statue, you have to go to the Academia Museum nearby, and unfortunately time did not allow for me to go inside to see the real one….but, it sounds like a great reason to return to Florence. 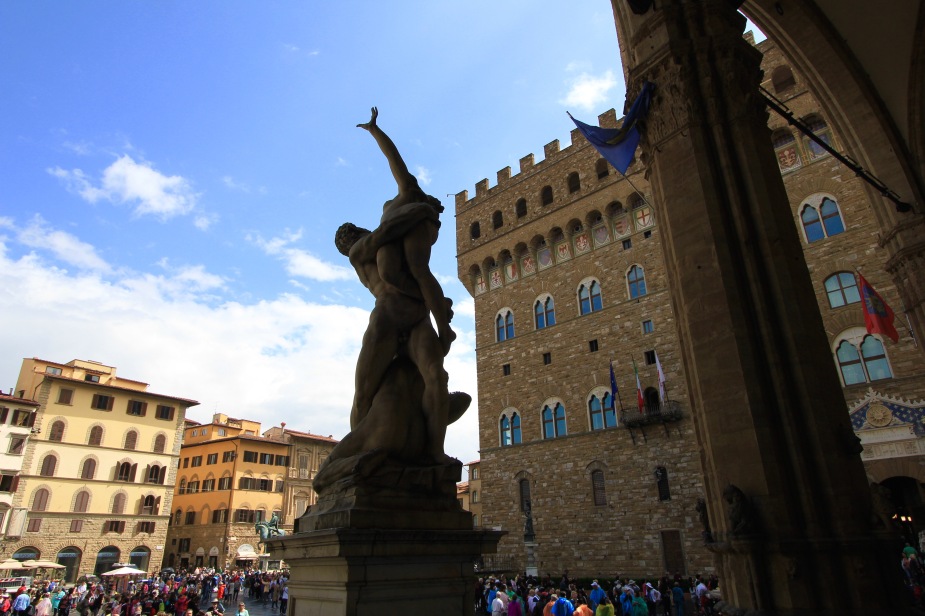 This statue of similar size to David is called the “Rape of the Sabine Women” – rape meaning stealing of women, which goes back to the 750 BC time period when the Romans invaded and took the local women as their wives. 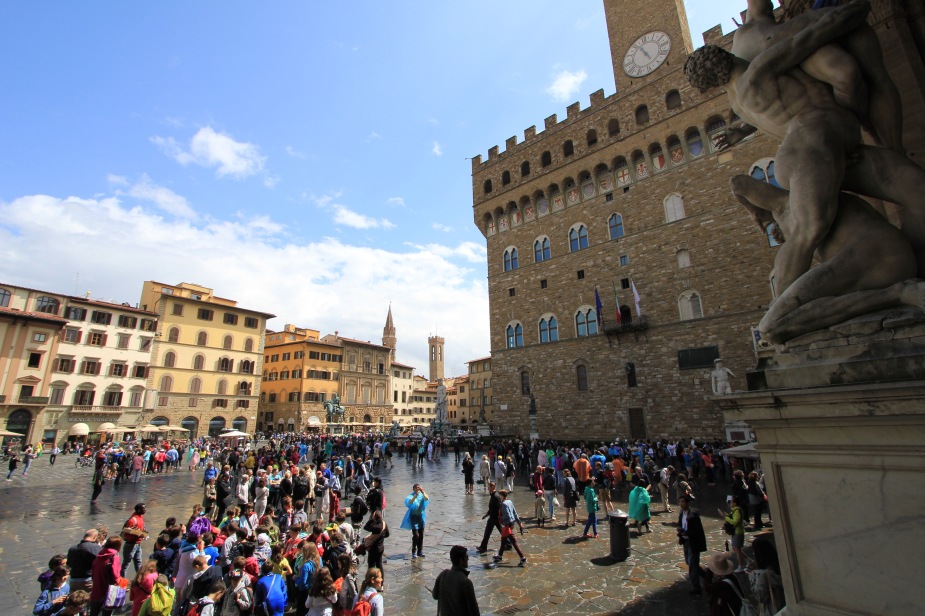 Just walking around the plaza is like walking in a museum by itself with all the free standing statues.

Bronze statue from 1560 showing the Greek hero Perseus with the head of Medusa.

After seeing the statues, I made my way to the most iconic structure in Florence, in a city full of icons….the Duomo Cathedral of Saint Mary.  This is a very large church set inside of the center of Florence and all its buildings.

One of the most dominating structures in Florence is the Cathedral of Saint Mary (mother of Jesus). Constructed between 1296 – 1436 with the facade being completed in the 16th Century. 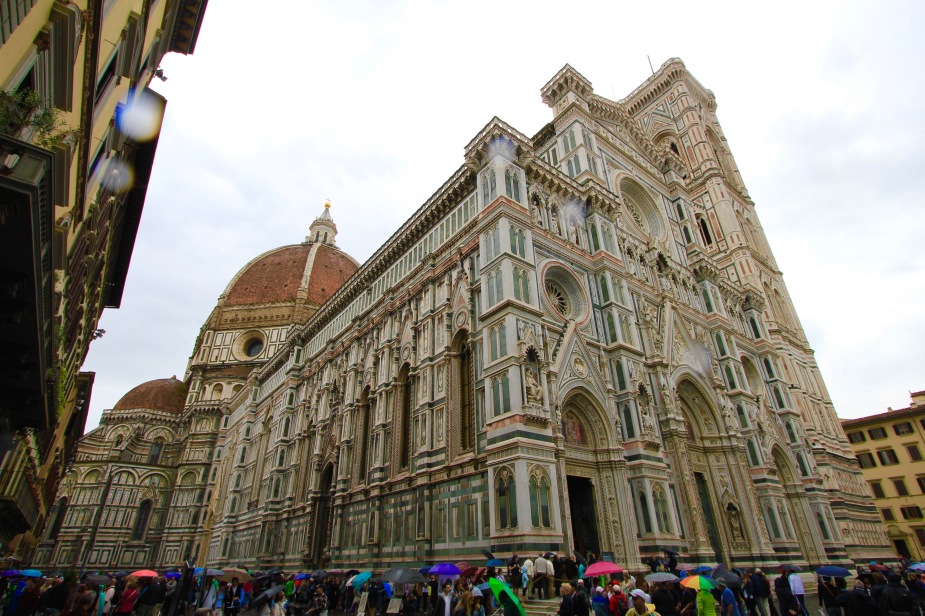 This is a very large church: 89,000 square feet, 502 feet long, 124 feet wide, and the dome and tower are over 375 feet. The line of people stretched all the way around the church. If I have not been inside dozens and dozens of other churches in Europe, I probably would have waited.

Not only is this Cathedral an impressive structure, but is like its very own marble statue with its marble facade and the artwork.  Even on this cloudy, drizzly day, the colors in the facade really stood out, and is so amazing to see.

But, even though I did not go inside…the outside is AMAZING with it marble statues and artwork all over the building showing various religious scenes.

Since in the Middle Ages, most people could not read, they could “read” the stories from the Bible from “looking” at the artwork.

The colors on the church are a yellowish tint of the marble with bright reds and blues in the artwork. But, making this photo black & white puts it into another time period

After leaving Florence, we then drove about 30 minutes into the Tuscan countryside to visit one of the largest castles in Italy, the Castello del Trebbio.  The castle has now been converted into a bed & breakfast and winery.  After touring the castle and seeing how they made their Chianti wine and their own olive oils, we went to their restaurant for a fabulous wine tasting event.

Castello del Trebbio. One of the largest castles in Italy, construction started in 1184 by the Pazzi family who were enemies to the powerful Medici family that ruled most of this area then. Eventually, the castle became abandoned and later purchased by a family in 1968, who has worked to turn it into a tourist destination with its views, hotel, and winery.

After leaving Florence, we drove out into the countryside of Tuscany (a State in Italy). Our destination was to the Castello del Trebbio for a tour of the castle and a wine tasting.

Here, the local wine is Chianti, which is a type of grape. Other than Chianti, they also produce various Olive Oils. Needless to say, we learned a lot about Chianti and Olive Oils.

The castle’s dungeon is now where the wine barrels are placed to age because of the darkness, dampness, and temperature. The cool thing about this tour, just as we arrived, a thunder storm started…as we were walking down into the dungeon, the cracks of thunder provided some serious ambiance!

After the tour, we were taken to the restaurant for the wine tasting….Cheers! Prost!!

After leaving the Castle, we made our way back to Livornio to travel to our next port of call in Cannes, France.  This was our second time visiting the area, and you can read about our first visit last year, when we traveled from Livornio to see the Cinque Terre area.

We thoroughly loved our trip to Florence and our little taste of Tuscany.  Tuscany is a beautiful place, and we hope to plan a return trip to spend more time in Tuscany soon.