Our first stop in New Zealand was to the enchanting area of the Milford Sound. The Fiordland National Park is on the southwestern side of the the South Island.

We joined fifty others from our cruise ship, who decided to take an  overnight excursion. Our trip was from the Milford Sound with an overnight in Queenstown. The next day, we rejoined our cruise ship in the city of Dunedin on the east the next day. 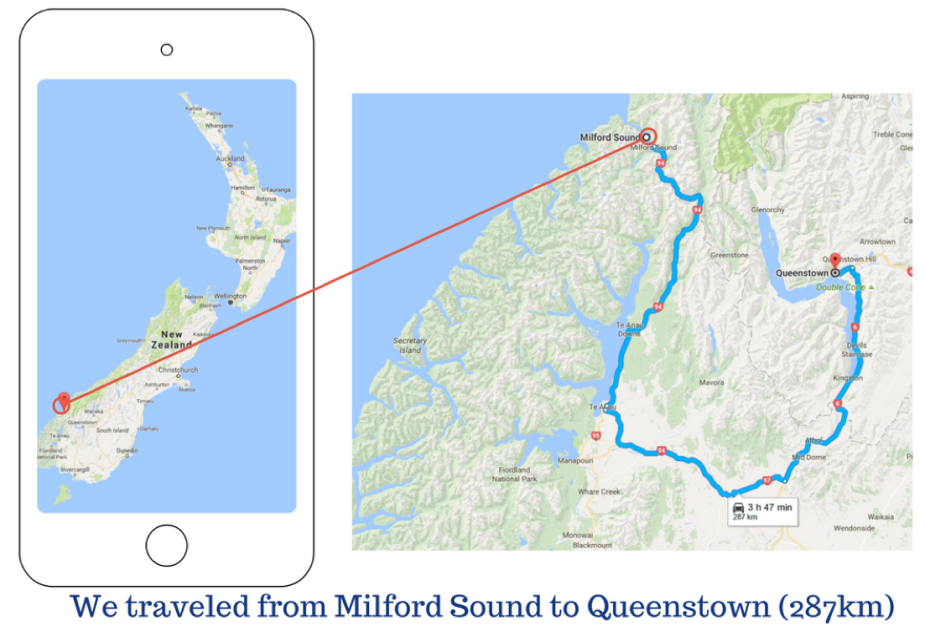 The morning we arrived was so peaceful. Our ship slowly made its way through the low-hanging clouds and fog through the fjord. Milford reminded us of our trip in the Norwegian fjords. The water was so calm and mountains grew taller on both sides as we traveled farther inland. 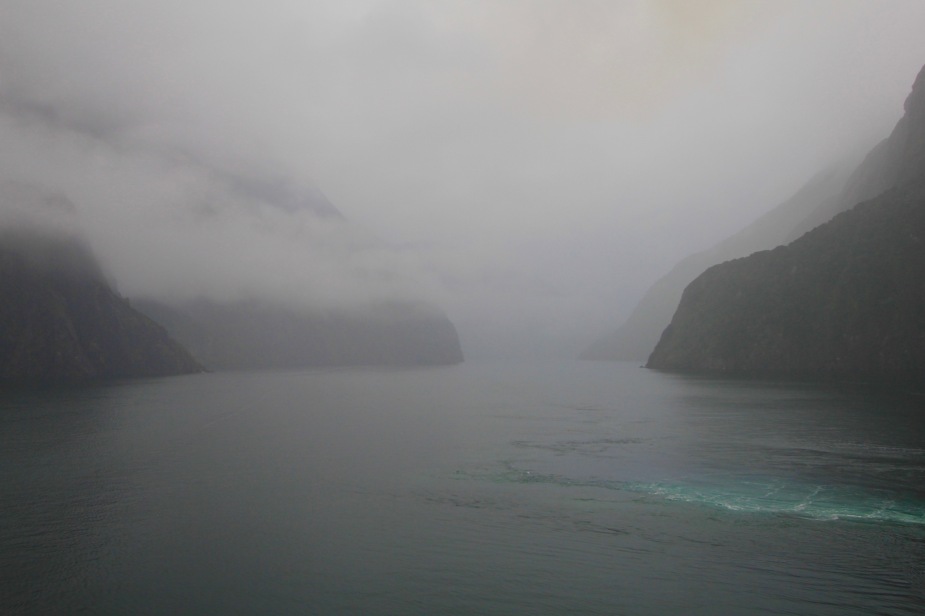 We reached the center of the fiord. Our ship slowly spun around to allow everyone to enjoy a 360-degree viewpoint. Before leaving for our excursion, we had our morning coffee out on our balcony. The funny thing is we had no idea of the glorious waterfall which was just behind us (second picture below).

Our weather made for an eerie scene. I have seen pictures on clear days where the views are breathtaking. This explains why this area has been the filming locations for many movies such as The Lord of the Rings, King Kong, and many others.

The author Rudyard Kipling once called the Milford Sound the “Eighth Wonder of the World”. The area is also known as Piopiotahi by the native Māori people.

Milford is one of New Zealand’s most famous and popular tourist destinations. Nearly 1 million visitors come to the otherworldly destination.

Milford Sound is one of the wettest places on Earth with an average of 252-inches of rain annually. This amount of water contributes to green moss clinging to the rock faces creating all the waterfalls.

The sound went undiscovered during the early explorations of Europeans. They feared the narrow entrance into the sound and the steep mountains along the water.

This changed in 1812 when the first European ships entered. Even though undiscovered for a long time, the Māori people have enjoyed the area for centuries. 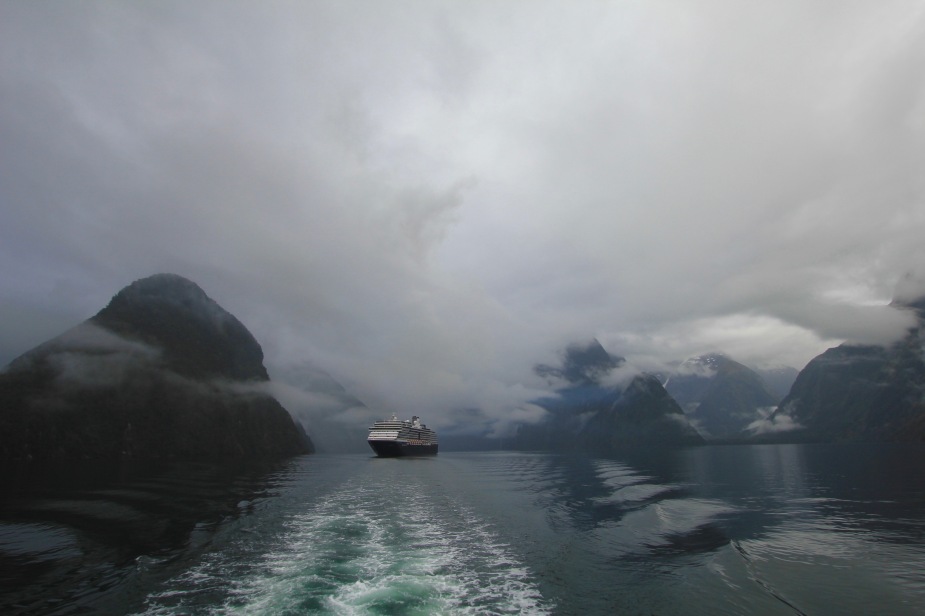 It came time to leave our ship. We went to the ‘A’ deck and boarded a small boat which came out to our ship to pick us up. We were the only ones to leave. We would rejoin our ship the next day on the other side of the South Island.

As we boarded our small boat, New Zealand border agents greeted us. They had the cutest little beagle with them. Its job was to sniff our bags looking for any contraband foods anyone may have taken from the ship. Unfortunately, my only picture of the beagle was too blurry because I was so excited taking pictures of our surroundings. 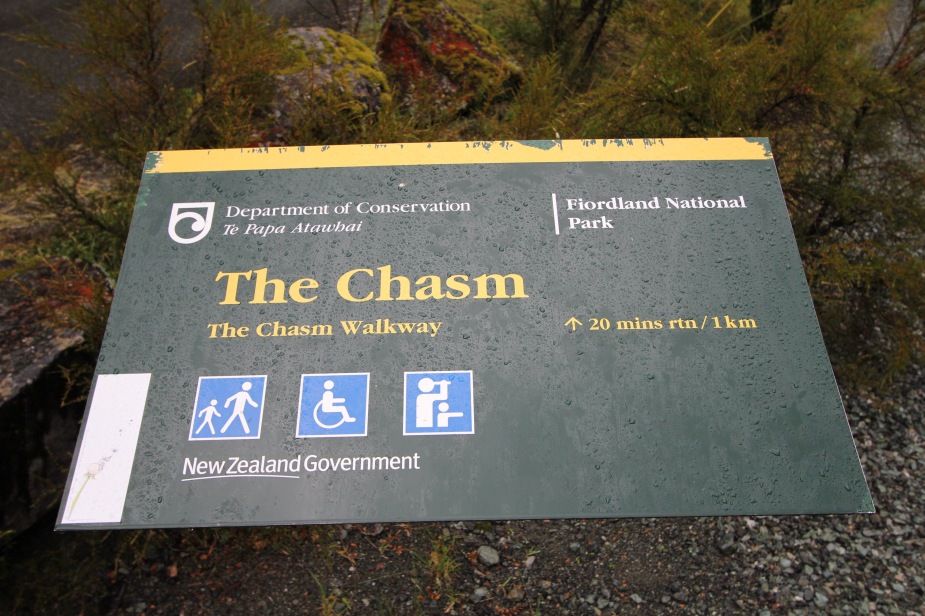 Our bus snaked its way through the switchback roads to cross over the mountains inland. After about 30 minutes of travel, we stopped at a place called “The Chasm Walkway”. 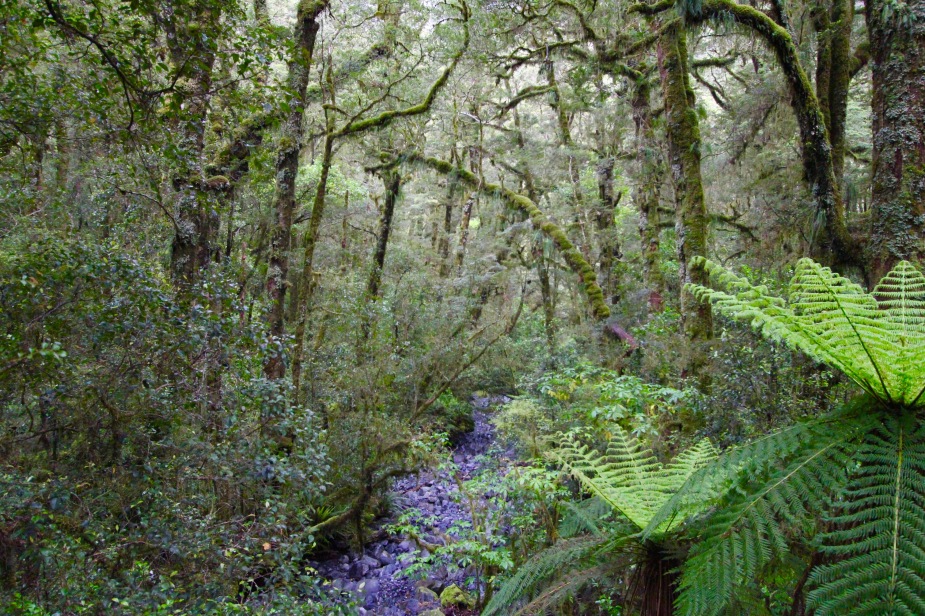 The Cleddau River flows from southern New Zealand into the Milford Sound. For thousands of years, the river has carved away rock creating a deep chasm (narrow, deep canyon).

The walkway is very easy to complete. It is a paved 400-meter walkway that makes a circular path through the rain forest. There are two, foot bridges to cross. Cach bridge provides an excellent vantage point to see the river below through the chasm.

The sound of the raging river does not come through the pictures. Standing in the middle of the bridge, you can get a sense of how the force of the water created such a scenic area.

While downpours of rain are possible, thankfully we only experienced a little light rain. Even if it were raining hard, this nature walk is a must for anyone visiting the area.

In 1935, construction of the Home Tunnel began, opening in 1954. The length of the tunnel is 1.25 kilometers (0.75 miles) and cuts through the mountains on the edge of the Milford Sound area.

We parked outside the tunnel once we passed. Large mountains with melting glacier snow created feather-like waterfalls trickling down the rock face. The size of the bus next to the mountain provides perspective to the heights around us.

I really expected a dinosaur to come running between the mountains at any moment. 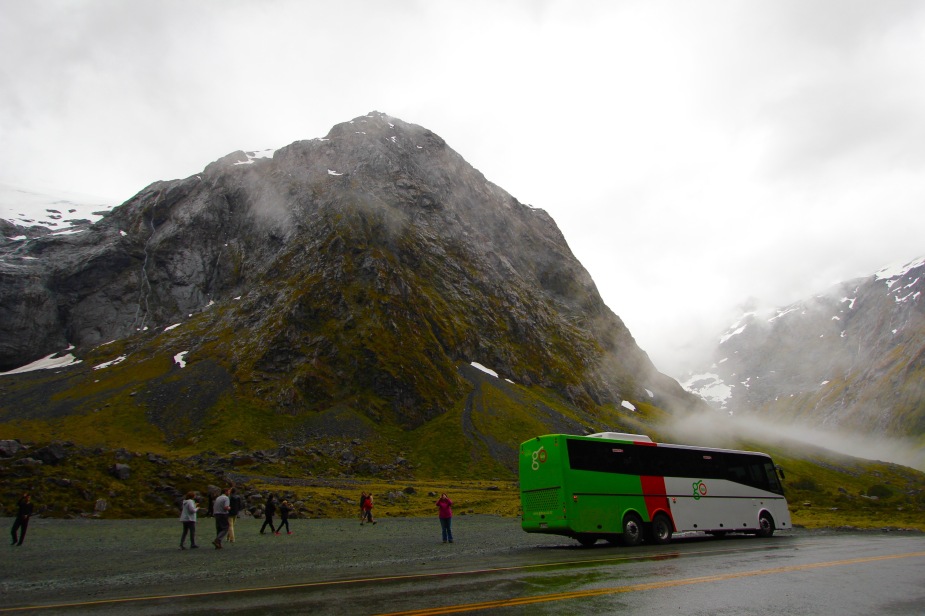 The lingering fog seemed to be lifting ahead of us as we boarded our bus to continue on to Queenstown.

Once we were back on the road, a valley full of lavender and wildflowers opened up in front of us as the weather cleared.

The mountains seemed to fall away in the distance as the flat valley grew and the cloud layer lifted. 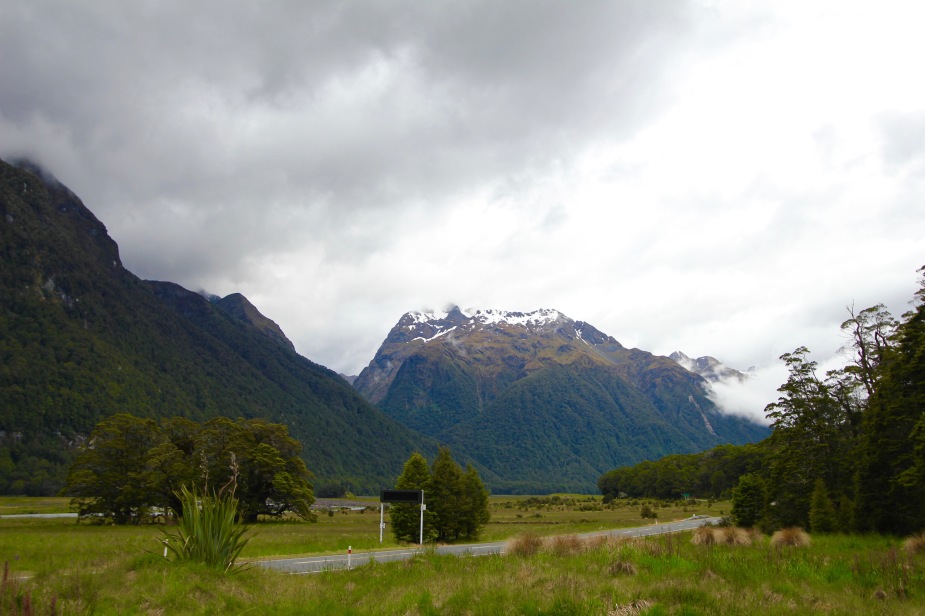 By noon, we stopped in a small town, roadside diner for lunch. At this point, the clouds had all lifted and the weather was perfect. Near the diner, a small lake was across the street which was very serene. 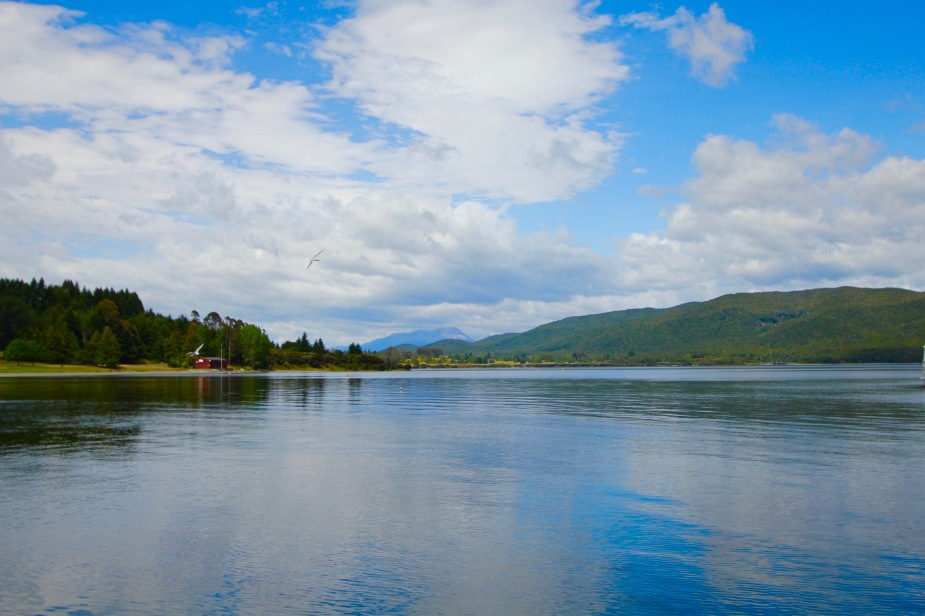 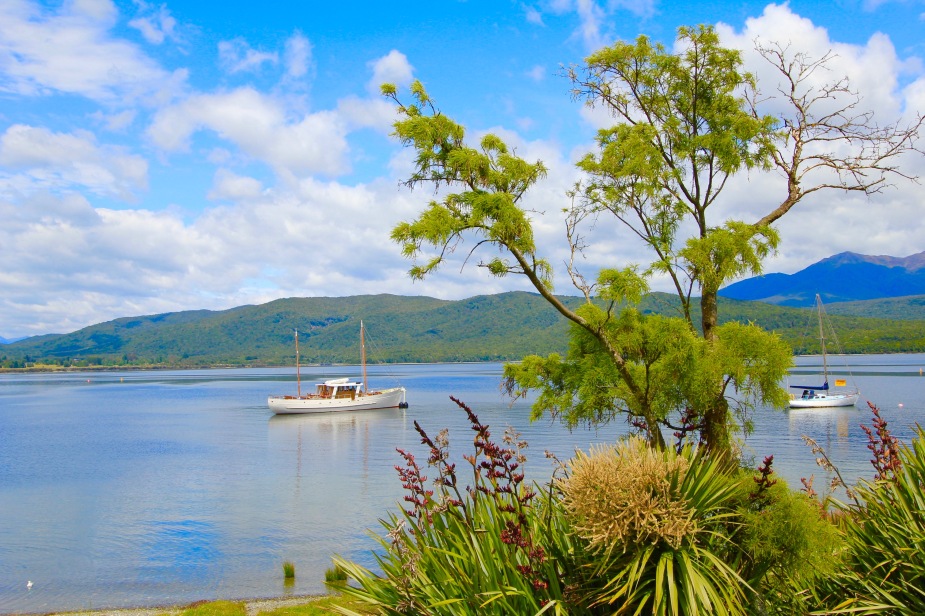 After about 6 hours of travel, we arrived in Queenstown where we had a wonderful evening. Our post about Queenstown is here.

Milford Sound is truly an enchanting place. While remote, it is worth the travel. And, after all isn’t that the point.