Did you know it takes 2.5 days of air travel to get to Bora Bora from New York?

A strange thing I like to do is study maps and globes… the real kind you hold in your hands and can touch. As a child, it amazed me how large the Pacific Ocean is as it fills the entire side of a globe. Not only this, but the South Pacific Islands are far from the East Coast of the United States… very far.

In planning our journey to Bora Bora, we examined our flight options. There are no direct flights from New York to French Polynesia. Direct flights are possible from the West Coast.

Since we were planning our trip to Bora Bora as part of our 15th Wedding Anniversary on July 5, 2018, we wanted to have a vacation that lasted at least two weeks especially since we would have 5 days of total travel time to and back.

Since Amanda and I travel mostly on United Airlines (Star Alliance) for work, we looked for our best route using our reward points. We found a direct flight from New York to Honolulu, Hawaii and booked two business class seats for free (we had a ton of miles).

We have never been to Hawaii, so we added this destination to our travel itinerary splitting two weeks between there and Bora Bora. Next, we needed to find air travel to Bora Bora. 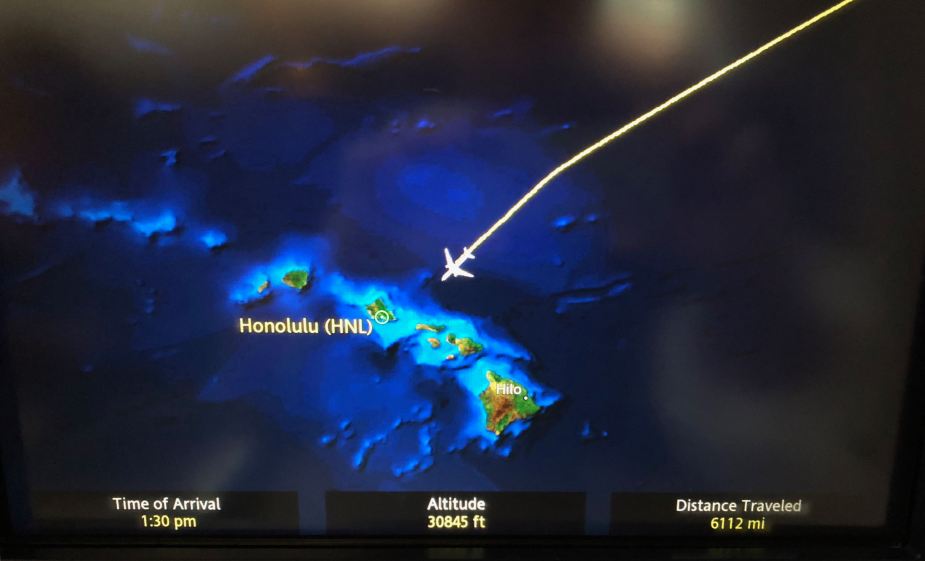 We stayed one night at the Lay Low Hotel at Waikiki Beach in Honolulu. We arrived mid-day, enjoyed the area for the evening, and had a fantastic breakfast the next day. Then, our flight to Tahiti left late in the afternoon.

Ideally, we wanted to find a Star Alliance Airline to Bora Bora, however, we found the best rates to be with Hawaiian Airlines. This airline also worked well for us because we had planned to fly between Oahu and the Big Island on the Hawaiian portion of our vacation.

Business Class dinner was a lobster salad with potato croquettes

Fun Fact: to get to Bora Bora requires another flight between Tahiti and Bora Bora which is about an hour. The airline that services French Polynesia is Air Tahiti. We booked our tickets for this flight, and we were all set. So, we had to wait months before our vacation began… but, it was worth the wait…

We stayed one night at the Intercontinental Resort in Tahiti. The resort is a short 10-minute taxi ride away. We arrived early evening and enjoyed a tremendous breakfast the next morning with our view of Morea (French Polynesian island beside Tahiti). Our flight to Bora Bora was at mid-day.

When booking a flight to Bora Bora, the airline does not assign a seat. The seats are first-come-first-serve. We had researched our flight as we wanted to ensure what the luggage requirements are. In this research, we read a post that said the best seats on the plane are on the left side, as they allow for perfect aerial views of Bora Bora as the plane approaches the island.

So, when the gate agent announced the flight was ready to board, there was a mad dash to the counter to get first in the line. We walked out on the tarmac to board the prop plane and hoped to get a seat on the left side. The flight attendant could ask people to move to re-distribute the weight inside the plane, but we were lucky — we got our seats on the left and did not have to move. The result is the fantastic picture of Bora Bora shown at the top of this post. 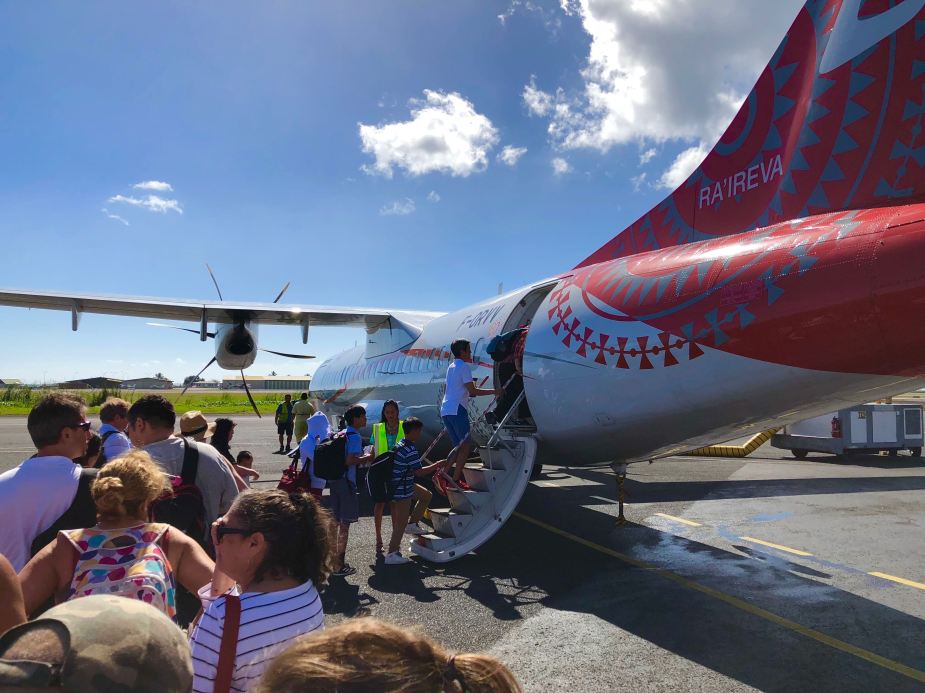 Once we arrived in Bora Bora, we then boarded a boat for a 20-minute ride around the lagoon to the St. Regis Resort. 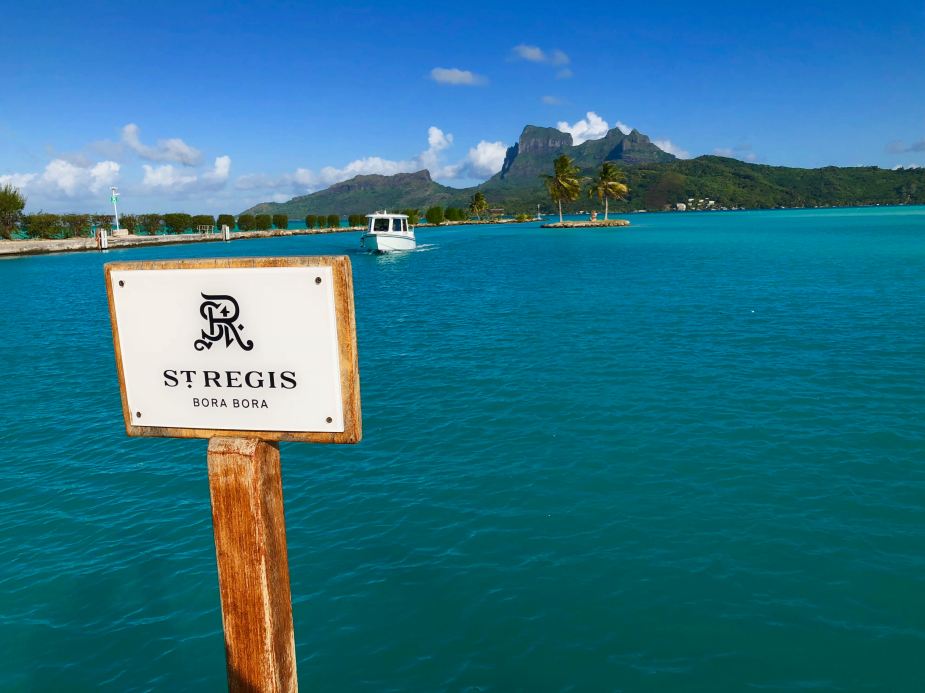 So, this is how we traveled from New York to Bora Bora:

A long trip… but, when you are getting lost in paradise, you expect to go far away… 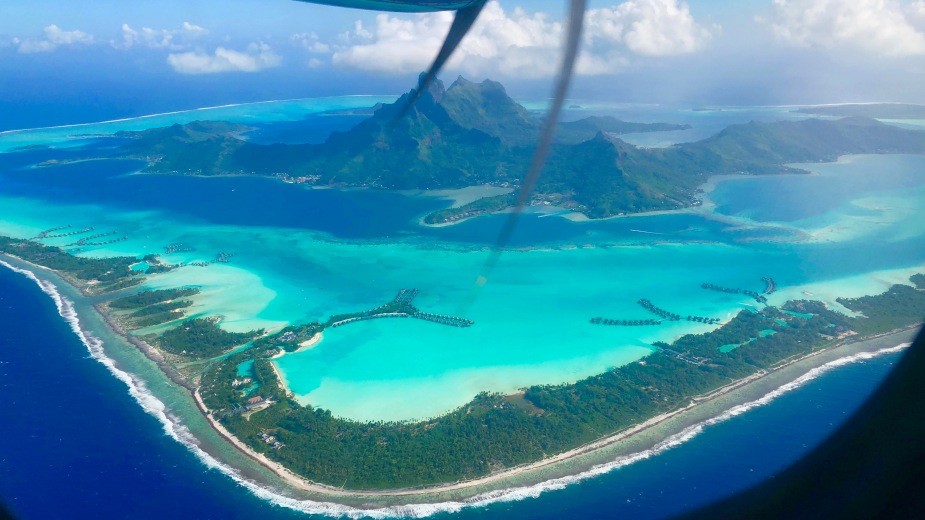