Our next stop after the Canary Island of Tenerife was to another Canary Island of Lanzarote. Of all of our cruise ports of call, both Amanda & I had low expectations for Lanzarote. But, after our 10 hour excursion, this island with all its unique volcanic landscapes far exceeded our expectations turning out to be one of our more memorable visits ever.

After leaving the small port capital city of Arrecife, we started to venture across the entire island. The island is covered in black volcanic soil and rocks with very little vegetation. So, the houses made from white-washed stone really stick out from the landscape.

The “El Diablo” (Little Devil) has become the island’s mascot. Why El Diablo? In the Timanfaya National Park on the southwest corner of the island, this area is nothing but 20 square miles of volcanic rocks and soil that looks like and feels like Hell on Earth.

Here at the Timanfaya National Park, we watched demonstrations of how there currently is still volcanic activity happening on the island today. The shovel was used to pick up the rocks so that we could touch them. We could not hold them because they were too hot to hold for a long time.

Digging a little deeper, the temperatures quickly rise. Here the demonstration is placing straw into a pit that is about 2 feet deep. As soon as the straw is placed down there, it catches on fire. Also, to demonstrate the heat, there is a pipe that is dug into the ground where water was poured down it, and 3 seconds later a geyser of steam erupted 20 feet into the air. I do not have a picture of this, but do have the video which I will post later.

To demonstrate the constant heat, a larger pit was dug with grating placed over it. On the grating are potatoes being roasted. This is to demonstrate how the locals still today have outdoor barbeque pits used for cooking

To aid tourism, a road was created through these lava fields around the now extinct volcanoes so that people can drive across to see the landscape and marvel at the volcano craters.

In this part of the island, the eruptions occurred in 1730 to 1736 covering about 1/3 of the island. In this 6 year span, hundreds of volcanoes began to erupt with lava flowing out. Here, the lava eventually cooled leaving behind these rocks and a useless landscape.

….here looking directly down into a crater 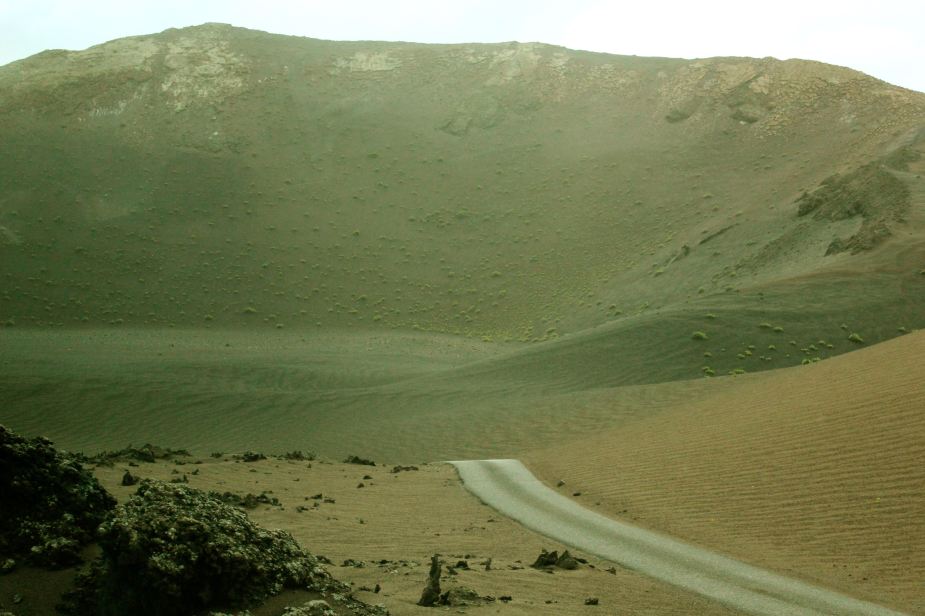 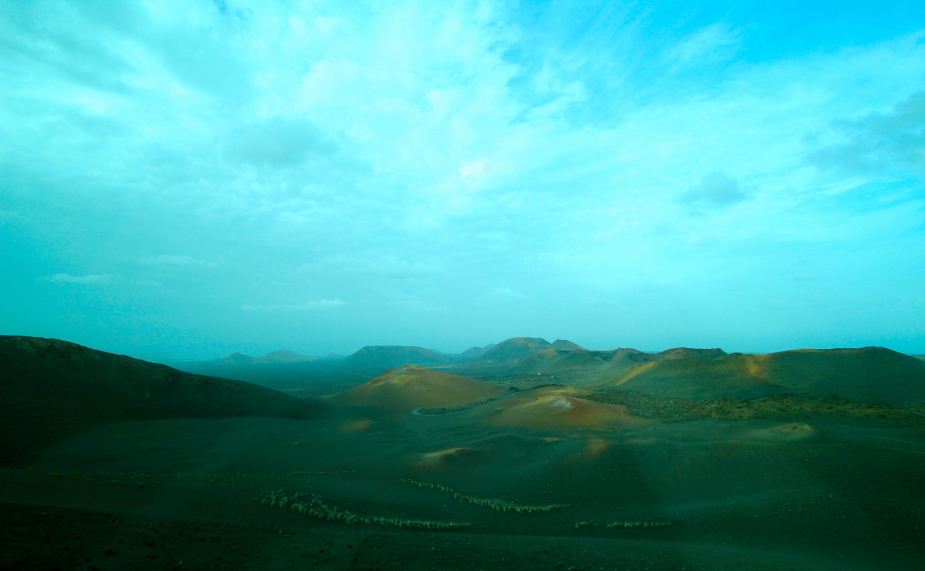 It is hard to imagine the terror the people must have felt as 1/3 of their island was on fire for 6 years in the 1730s. But, the left behind results make for some beautiful landscapes.

Large volcanic crater in the center

Eventually, we began to leave the rocky part of the island to where the lava more evenly flowed. Here, the soil is very fertile. But, the problem is the island does not see a lot of rain, so it is very dry. A type of grape that does well in these enviornments is planted here and does really well. But, to help the grapes grow, pits are dug about 3 feet deep & 5 feet wide with the grape plants planted in the middle. The pit helps collect morning dew and rain water and stone wall are placed above to protect the plants from the very strong winds that can blow.
This has to have been the most unique vineyard we have ever seen, and we live in the middle of the Riesling area in Germany!!

And, one of our stops was to have a wine tasting of the local wines created here. The wine was very sweet and strong, almost tasting like a cognac (brandy). Here inside the Bodega la Geria Winery 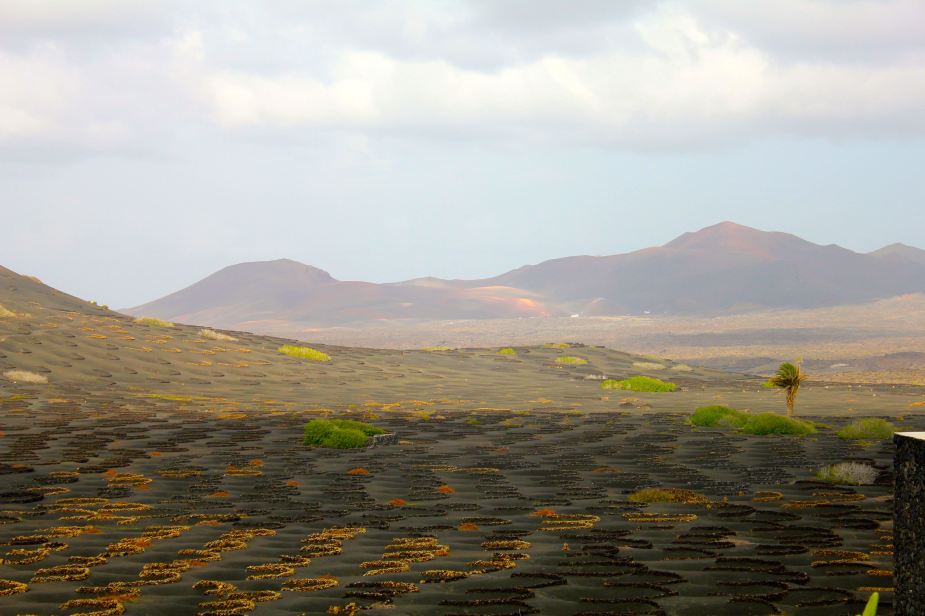 Another view of their vineyard…loved the shape of the ground and how the little bit of green color just really stood out. Not the mention the sun finally appearing. Today, the sky was a little hazy because winds were blowing from the east, blowing sand from the Sahara Desert in Africa. 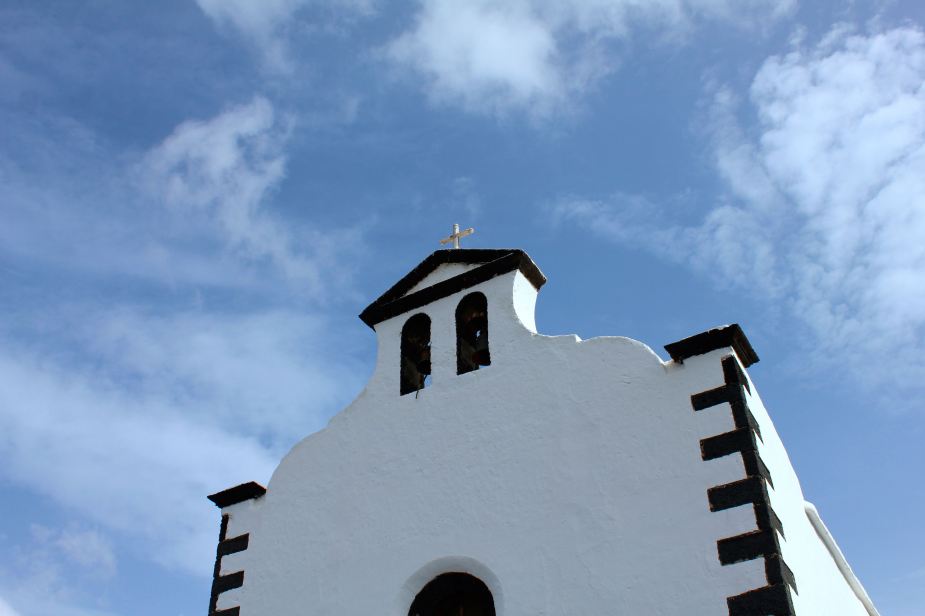 So, where we had lunch, during the 1730s as the lava was flowing to in the direction of this village. The villagers would bring images of the Virgin Mary in front of the lava hoping she would save them. One day during this ceremony, a small boy fell into a newly created fissure, and a woman in white whom the villagers had never seen came out of the fissure carrying the little boy and the advancing lava flow eventually stopped. As a result, the villagers thought the Virgin Mary had saved them, erected the church and inside is a statue called the Virgin of the Volcanoes. We did not go inside as they were having a church service while we were there….but, a cool story nonetheless.

After lunch, we headed to the north side of the island to an overlook called the Mirador del Rio. From here, there were excellent views of the valley to the sea. This side of the island does get more rain, and therefore is a little more green. 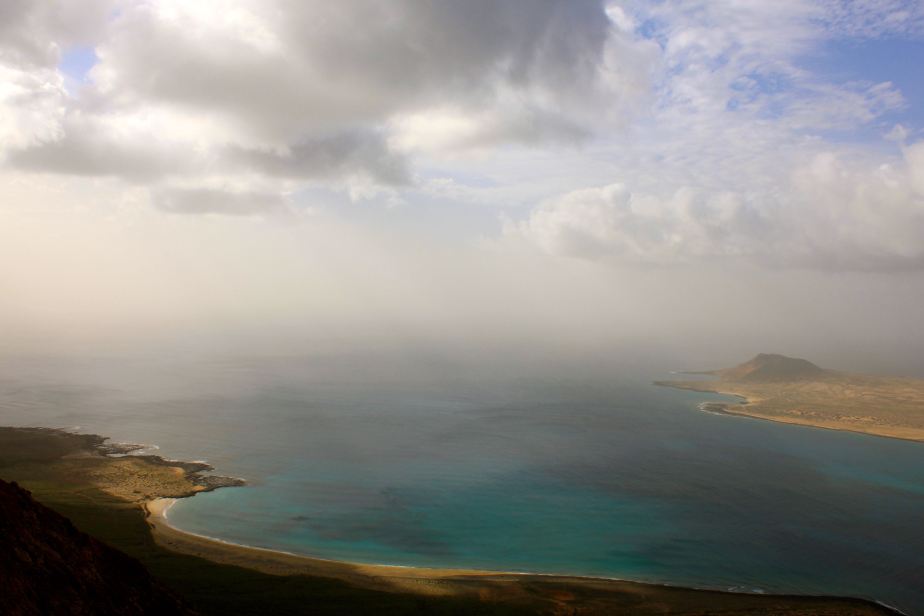 After leaving the Mirador del Rio overlook, we then went to the northeast part of the island to very unique place. It is an actual lava tube (tunnel) created as the lava flowed from the volcanoes to the sea. This area is called the Jameos del Aqua.
So, we enter down into the opening of the lava tube and there is this small, clear lake within the tunnel 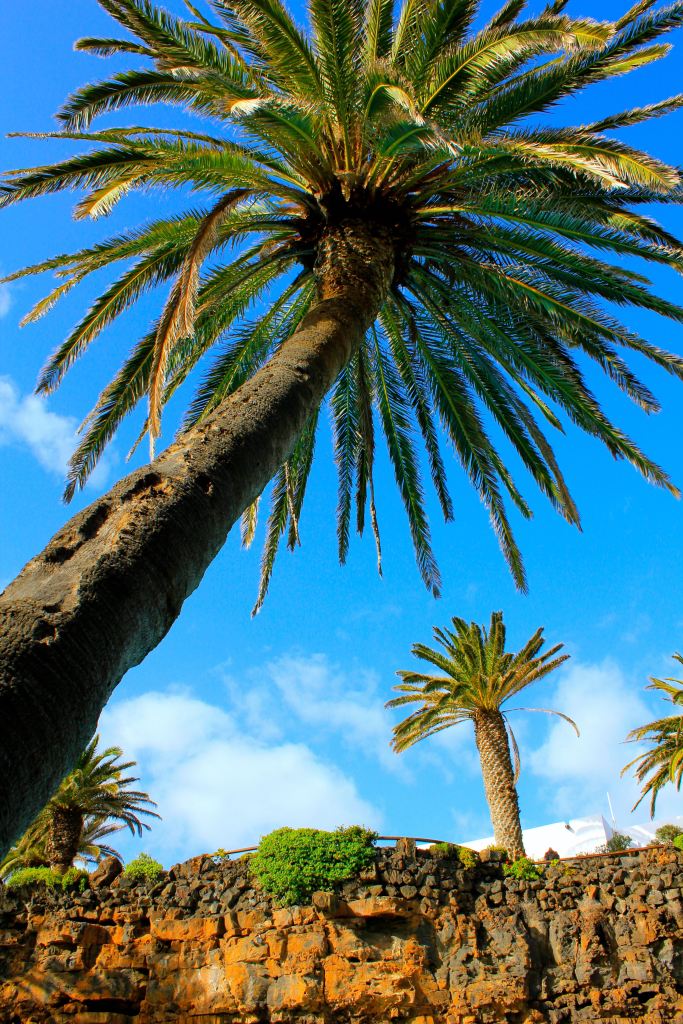 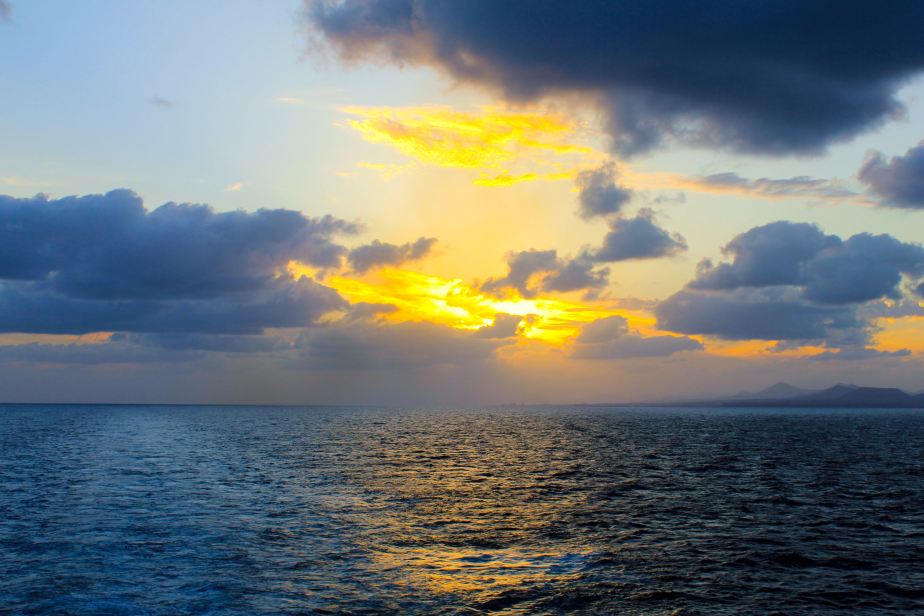 The view of the sunset over Lanzarote as we left….nothing like seeing a sunset over volcanoes

The Canary Islands were truly a marvelous place to visit in early January.  I can understand why this area is so popular with so many Europeans during the summertime…in fact, we just may to experience this for ourselves sometime in the future…..our next stop is on to Malaga, Spain…..